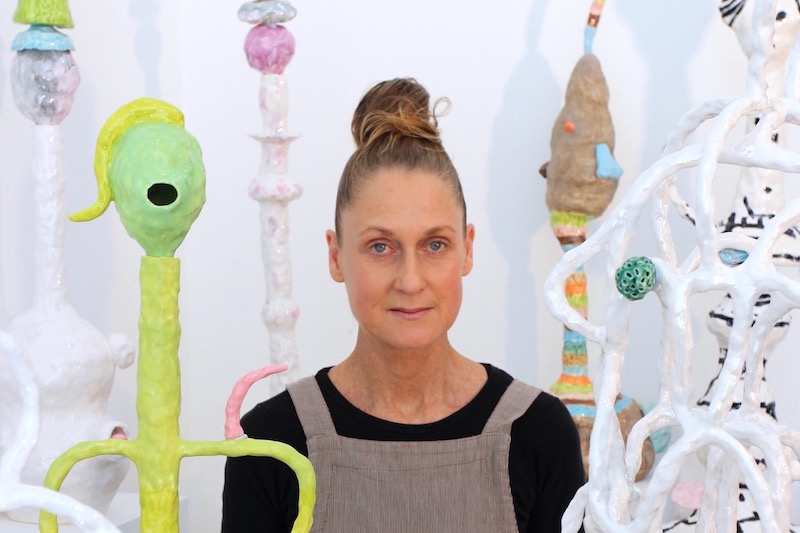 Sullivan+Strumpf has announced the representation of acclaimed ceramicist Lynda Draper. Based in Illawarra, Draper was recently recognised in a landmark survey of one hundred of the world’s most important ceramic and clay artists (Vitamin C – Clay and Ceramic in Contemporary Art, Phaidon 2017). Draper is currently Head of Ceramics at the National Art School.

Draper constantly pushes the technical limits and conventional aesthetics of ceramics with her skeletal constructions. Her work explores the intersection between dreams and reality, the phenomenon of the metaphysical and pareidolia or sublime coincidence. Her art bridges the gap between these worlds as her subconscious comes across in fragments of memory, culture, environment; ghosts which are portrayed in her spindly ceramic forms. Her work is playful and invites childlike and fantastical contemplation of another realm.

Draper has been practicing for more than 35 years and been the recipient of numerous national and international awards. In 2019 she was recognised with Australia’s most prestigious ceramics prize, the Sidney Myer Fund Australian Ceramic Award for her multiple-piece work Somnambulism. Other notable awards include the 16th International Gold Coast Ceramic Award, the Fisher Ghost Award and the Acquisition Award MIC. Her work is in national and international collections such as the National Gallery of Australia, Canberra; International Museum of Ceramics, Italy and the Renwick Alliance Gallery, Smithsonian Institute Washington among others. Draper is also represented by Gallerysmith in Melbourne.

Draper will be exhibiting in Sullivan+Strumpf’s Summer Annual 21 show in January. Her solo exhibition debut with Sullivan+Strumpf is scheduled for July 2021. On her new representation with the gallery Draper says, “(the gallery is) an arts forum where risks and alternative visions can be realised within a supportive environment. To be able to create work and exhibit at S+S is an incredible opportunity.”

Image: Lynda Draper in her studio. Courtesy: the artist and Sullivan+Strumpf, Sydney.

What’s in the Stockroom: Charles Nodrum Gallery
Scroll to top