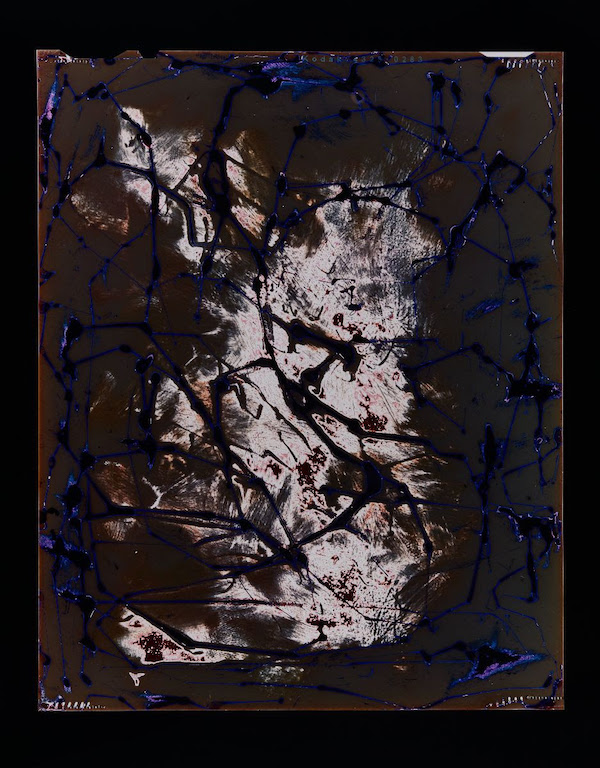 Varga’s practice challenges the conventions of photography by merging subject and material.

A photographer without a camera, Justine Varga, has won the 2019 Dobell Drawing Prize for her chromogenic photograph Photogenic Drawing (2018). The prize is exhibited at the National Art School in Sydney, also Varga’s alma mater where she graduated in 2007.

It’s been a big start to the year for Varga. The artist was also picked up by Tolarno Galleries, one of Melbourne’s premier commercial spaces. She will present her first solo with Tolarno in April 2020. (She is also represented by Adelaide’s Hugo Michell Gallery.)

Varga’s practice blurs the line between the chemical and detached processes of photography, and the physically intimate and autobiographical elements of drawing. Her approach has been described as encompassing “slow journalistic” methods in her manual handling of a negative. The process behind Photogenic Drawing entailed daubing over film with pigment, to then be drawn on with pen, scratched and spat on, and exposed to light over a prolonged period of time before being reproduced in the darkroom.

Of this procedure, Varga explains: “When that negative is printed large-scale in the darkroom, these inscriptions are revealed to intermingle with the distinctive signature of my fingertips, a trace of touching that is generally forbidden in the production of photographs.”

She continues: “I have always seen my photography in these terms, as a drawing with light, or more literally as a light-sensitive substrate on which I make marks or allow the world to leave its own marks.” The National Art School has praised her work as a sophisticated and meaningful “distillation of our collective lives”.

The award comes after heated controversy in 2017 when Varga won the $20,000 Olive Cotton Award for Photographic Portraiture, for her grandmother’s portrait Maternal Line. Photogenic Drawing followed a similar method to her contentious portrait, which involved her grandmother spitting and drawing on film, to then be reproduced in the darkroom. Critics argued that drawing on a negative could not really be considered photography.

Whichever side of the argument you land on, there’s no question that Varga’s practice challenges and questions the conventions of photography and drawing by merging subject, material, and traditionally opposed mediums.

The Dobell Drawing Prize will show at the National Art School until 25 May 2019.