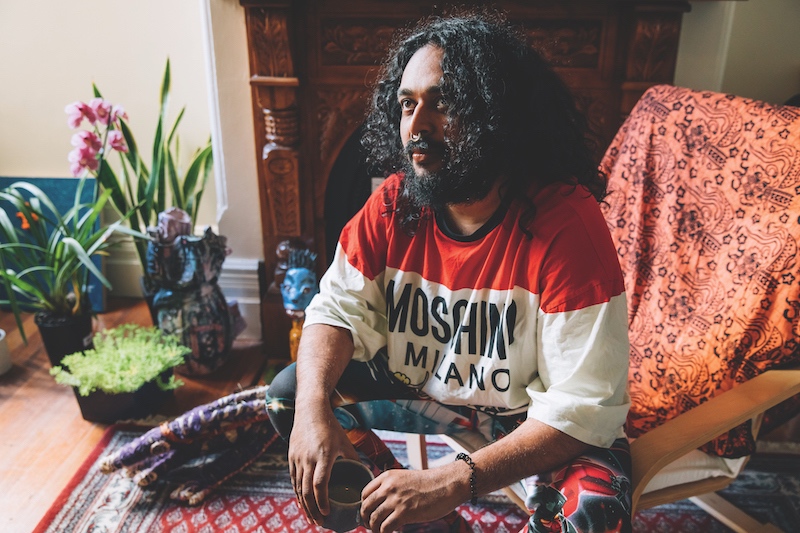 Charged with themes of politics, gender, sex and more, Ramesh Mario Nithiyendran’s visceral sculptures are growing in parallel to his ascent to art stardom.

Ramesh Mario Nithiyendran has arguably the best head of hair in the art world, and the regimen to prove it (for the record, it involves a lot of Aesop), plus he is not too shabby in the sartorial stakes either. He is an unabashed fan of Jeremy Scott for Moschino, whose designs he regularly wears. He is not just, however, a snappy dresser but one of the most exciting and engaging artists practicing in Australia at present, on the radar of curators, critics and art collectors. His work, audacious and difficult to categorise (much like the artist), is a riot of influences, themes and aesthetics, a chaotic mélange that magically holds together. So what exactly does he make? I asked him to describe his practice for the uninitiated.

“I would start with some key words. These would be, gender, sex, politics, power, religion and figurative sculpture. Although, I would say that the work is a reflection of the world I live in and the things that interest me in our current climate. In this respect, it’s no surprise that self-portraiture and self-representation seem to feature as both themes and forms throughout my practice. I also like to think about the ways in which the past, present and future mash up and will mash up.”

His installations and sculptural forms are an exploration of the idea of ugly art, wildly figurative with their wonky lopsided clay forms and cartoonish grins, and the tradition of outsider art: although the work never tips over into mawkishly or deliberately bad. Rather, Nithiyendran’s hedonistic (at times, downright sexy) sculptural installations transmit a shamanic vibe. Assembled en masse his sculptures form a tribe of benevolent spirits; false gods that beg to be worshipped. I defy you to not like them.

Since winning the 2014 NSW Visual Arts Fellowship (Emerging) just after graduating from UNSW Art & Design in Sydney his career has been on a stratospheric trajectory. In 2015 he was awarded the lucrative Sidney Myer Fund Australian Ceramic Art Award at Shepparton Art Museum and in 2016 was included in Magic Object, Lisa Slade’s Adelaide Biennial of Australian Art, the Kuandu Biennale in Taipei, Taiwan and produced a solo exhibition, Mud Men, at the National Gallery of Australia. He is not resting on his long tresses, however. The artist will have his first solo exhibition with Sullivan+Strumpf in October 2017. Ursula Sullivan says, “As soon as I saw Ramesh’s work I thought, “This is incredible. Such a glorious generous mess of ideas and attitude and awesomeness. I must own one and he needs to be with us.” She adds, “Ramesh marks a new generation of artists that have a very different foundation to many others, post-millennial perhaps, but ultimately his work multitasks so many different and often contradictory ideas. He is ambitious and adventurous, he thinks very broadly and doesn’t see the point of blindly following tradition — he is the new art superstar.”

In early 2018 he will exhibit at the 2018 Dhaka Art Summit in Bangladesh, a project that is co-commissioned by Sydney’s Artspace and the Dhaka Art Summit, and also supported by the Australia Council. He describes it as his “most ambitious project to date. I’ll be flirting with the moving image as a key component of this work.”

One of the most compelling aspects of his work is the exploration of clay and ceramics, which could be said to be enjoying a moment in contemporary practice. But Nithiyendran brings to his work something bigger than a trend. “I think ceramics as a medium is being fetishized. Projections of authenticity in terms of the ‘handmade’ seem to be dominating a lot of the current discourse around the material and commentary surrounding its use within contemporary art contexts… I actually have no real ‘love’ for clay or anything romantic like that. I’d be unsurprised if I spend a few years not even touching it. Although, what keeps me coming back is fairly base. I enjoy working with it. The various stages of transformation are engaging. It’s also fairly unpredictable, which keeps the studio process uncomfortable. If things are feeling safe and formulaic in the studio, I get pretty bored.”

This tension between form and no form is perhaps key to what makes Nithiyendran’s work sing. His works have a shifting and changing quality that flirts with scale; his project oscillates between the grandiose (though never bellicose) and the intimate. He says, “I like to make work of all sizes. I’m stimulated by the different bodily/corporeal relationships and formal considerations one must consider when working on different physical planes. However, my passion lies with monumental work. It may sound masochistic, old-fashioned or bizarrely ‘masculine,’ but I feel some kind of pull to making work that makes my body sore.” It’s a crazy ride ahead.

Director’s of Sullivan+Strumpf, Ursula Sullivan and Joanna Strumpf, were introduced to the work of Ramesh Mario Nithiyendran by Tony Albert, another of their represented artists. “The first time I saw the work I was blown away,” recalls Sullivan. “I was impressed and confused and delighted and horrified all in one second. So few artists can draw that out in me, there was something special going on. We watched his work develop for a long time, and then got the opportunity to meet him at the Adelaide Biennial and we got along so well!” According to Sullivan, there has been a lot of interest in Nithiyendran’s work from collectors and curators. But she and Strumpf have been careful to stagger the pricing of the artist’s work saying, “Ramesh is still young and, on the international scene, still emerging, so we must act responsibly regarding prices and really ensure a slow and steady rise.” Indeed, the artist’s work appeals to collectors because he combines traditional techniques, particularly ceramic sculpture, with contemporary themes including “the impact of the internet on creation and self perception.” She says that collectors who appreciate Nithiyendran’s work “love the unabridged and all-encompassing” nature of his pieces. In 2018, Nithiyendran will exhibit at the Dhaka Art Summit, a project that has been co-commissioned by the Dhaka Art Summit and Sydney’s Artspace. Sullivan is excited by the prospect of Nithiyendran’s participation in the summit, and optimistic at the thought of Nithiyendran’s work being exposed to the eyes of “the worlds best curators and museum directors.” – Amelia Winata

Ramesh Mario Nithiyendran has been confidently received by so many influential institutions in such a short amount of time. But it was as recently as 2014, Nithiyendran was exhibiting as an ‘emerging’ artist in the NSW Visual Arts Fellowship exhibition. This is where Lisa Slade, who curated Nithiyendran’s work into the 2016 Adelaide Biennial of Australia Art: Magic Object, first encountered the artist’s practice. For an artist as young as Nithiyendran to have quickly found the level of success that he has, there must be a certain cultural poignancy that has struck a chord with curators and viewers. “His work’s cultural relevance is probably its cultural irreverence,” says Slade. “Being in the company of his work is like being in his company: you’re given licence to relax, challenge your ideas and expectations and you’re invited to laugh – loudly!” His approach is also extremely considered for a visual artist. “Ramesh is a maker but he also thinks like a curator,” says Slade. “The audience experience is always front of mind for him when he is conceiving his exhibitions. Whether it’s plinths or penises (one could argue that they are related!) he pushes the matter and the meaning in his installations.” Despite ceramic sculpture being Nithiyendran’s predominant medium, Slade notes that the artist actually trained as a painter. It is perhaps this formal education that informs the bright palettes of his ceramics as well as his regular use of spray paint, which might be understood as a reaction to the medium’s conservative tradition. – Amelia Winata

A solo show of the artist’s work entitled R@MESH will show at Sullivan+Strumpf, Sydney from 21 October – 11 November 2017.