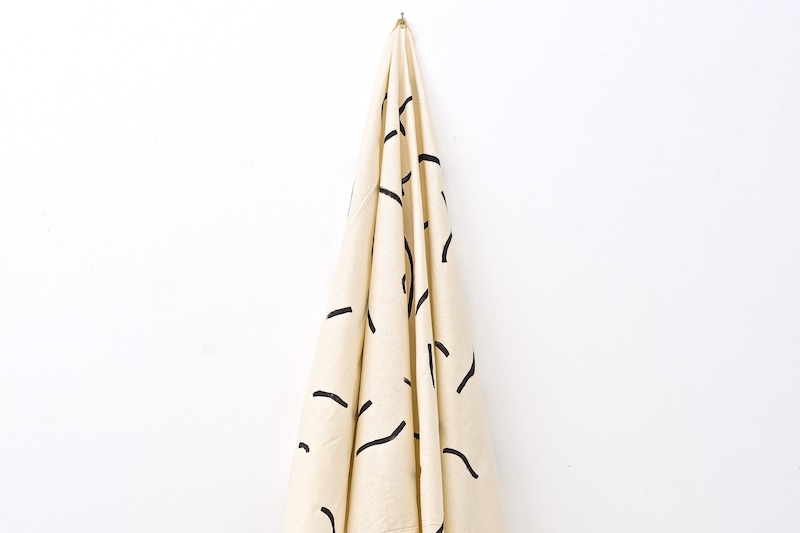 Made within a strict set of environmental restraints dictated by her hectic schedule as a fulltime working mother and artist, Tanuvasa’s drawings are frank records of her immediate environment.

Even before graduating from her MFA at Elam School of Fine Arts in 2014, Auckland-based multidisciplinary artist Salome Tanuvasa was garnering notice for her playful work, most of- ten made in response to her surroundings. In particular, her 2012 film Expensive Moments, first shown in This Must Be The Place at St Paul Street Gallery, went on to be re-shown at Auckland’s Ozlyn gallery and then again for a solo exhibition at Gaffa Gallery in Sydney. Her most recent work has primarily resided in the (expansive) realm of drawing. Sometimes penned small on paper, other times swept large across a wall, Tanuvasa’s gestural drawings have been shown in numerous galleries across Aotearoa – including at her Auckland dealer gallery Tim Melville, where she first exhibited in early 2018 and will be showing again in September.

WHAT DOES SHE DO?

Made within a strict set of environmental restraints dictated by her hectic schedule as a fulltime working mother and artist, Tanuvasa’s drawings are frank records of her immediate environment – of the humble materials at hand (paper, card, giftwrap, pens), and the snatched time they are made within.

Yet they also transcend the conditions of their making; they feel surprisingly calm and are refreshingly candid, made up of clean, deliberate gestures that seem to be trying to tell you something.

They really are trying to tell you something. For her upcoming exhibition at Tim Melville Gallery, Tanuvasa will be employing her eloquent, linear visual language to approach the idea of language itself, and to consider the ways in which verbal and visual languages can create meaning and convey experiences of living.

“To explore the idea of language, I draw from the rhythmic action of writing, and from the phenomenology of direct experiences that allow me to play in the area of how meaning is formed. There is a series of decisions happening when making my works, because of my scarce time, and the many roles I play… I am constantly in conversation with myself about what materials and actions can be appreciated.”

What Next?: Scott Gardiner
Scroll to top