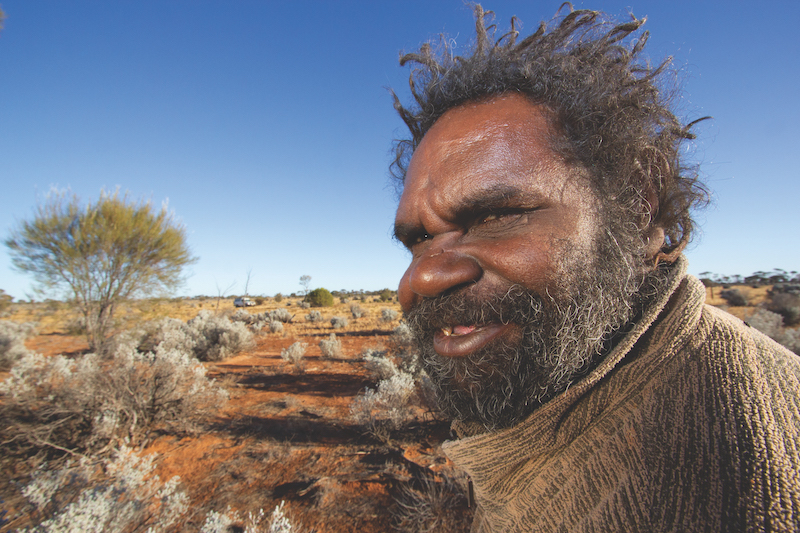 Having only ever painted his Country, Lake Barker, Timo Hogan has an unbreakable connection to place, tradition and family.

Timo Hogan is among illustrious company. In 2021, the Pitjantjatjara artist’s large-scale monochromatic painting Lake Baker, 2020 took out the top prize at the prestigious Telstra National Aboriginal and Torres Strait Islander Art awards (NATSIAA). This posits Hogan’s work amidst the work of such luminaries as Michael Nelson Jakamarra, Kathleen Petyarre, Gulumbu Yunupiŋu, and Les Mirrikkurriya, to name just a few of the eminent Indigenous artists who have previ- ously shared in NATSIAA glory. At 48 (at the time), Hogan was a stand-out as one of the youngest artists to have won the award.

The NATSIAA winning painting is emblem- atic of Hogan’s painting practice. Like all of his work, including that in his forthcoming exhibition at The Northern Centre for Contemporary Art (NCCA), Darwin, Lake Baker depicts – or embodies more so – his father’s Country Lake Baker, which is approximately 1,500 kilometres inland from the central coast of Western Australia. Of his paintings Hogan says, “Always the same place, Lake Baker. That’s because it’s my place, My father’s place.”

His father is artist Neville Niypula McArthur, from whom Hogan inherited the responsibility to care for and tell the stories of Lake Baker. When Hogan was a boy his father would take him to Mount Margaret Mission and they would stay at the nearby homeland of Yapuparra with kin and take trips to Lake Baker, always hunting along the way. Country is kin and through time spent in this place and wisdom passed from generation to generation, Hogan has come to have an indelible connection with and understanding of Lake Baker, which is the only thing he has painted, ever.

Such is the abundant vivacity of Country, its deep ecological, cultural, and historical richness that it can never be exhausted as the subject of artworks. Although Hogan now lives more than 1,000 kilometres away from Lake Baker, in Spinifex Country, he paints this place as if he were right there in it, this is because Lake Baker is a part of him and he is a part of Lake Baker, as are his captivating paintings.

Hogan’s forthcoming exhibition at NCCA further tells the story of the artist’s kinship with this place. For this show, Hogan has made a series of large-scale paintings – 200 x 300cm and 200 x 290cm – in his distinctive monochromatic style. It’s “a dangerous place” Hogan says, and “when you come there and you’re getting close that cold wind starts coming around. You can feel him, that Wanampi, that watersnake man, he knows you’re there.”

In all the impressive paintings Hogan will show at NCCA we see a serpent figure presented. In each of the paintings, the serpent – could this be Wanampi presenting himself to us? – straddles a white creamy mass, an organic shape that has the presence of a land mass surrounded by water, which Hogan renders in a deep black. Or is it the other way around, white water, black land?

There is a confluent interplay between these forms, suggesting it may be reductive to try and think such entangled features of place as separate from one another.

In Pantutjara – Timo Hogan, written by Spinifex Arts Project manager Brian Hallett, we hear from Hogan: “My father took me to Lake Baker, all around, rockhole and all. I know all these places but I can’t show them. Millmillpa [dangerously sacred]. I’m taking over this [C]ountry now as my father is getting old. I’m the only son and people say we are like twins, my father and me… I know how to use spears – he taught me everything.” This is the practice of kinship Hogan carries on in his engrossing paintings, as with generations before his father and with generations to come kinship always includes the land and its spirits. It is with great generosity that with his paintings Hogan offers us a chance to be affected by the ancestral energy of Lake Baker.

Paul Johnstone has worked with Timo Hogan for the last eight years, noting his “powerful negative space reflective of Tjuntjuntjara” as a key element of his work which draws him in. “Timo’s work is highly sought after,” continues Johnstone. “A combination of limited works and striking aesthetic coupled with winning the prestigious NATSIAA has culminated in many collectors and institutions keen to acquire his work. All collectors [would resonate with Timo’s work] as his depictions are cultural yet contemporary.”

Director, Museum and Art Gallery of the Northern Territory, Darwin

“For an early to mid-career artist, who has already had a ten year break from painting, one is truly blown away by Timo Hogan’s mastery of the form. He paints like a senior man a generation older, and achieves what only a few artists do; creating aesthetically compelling and beautiful works, that also pass down traditional stories and knowledge for future generations. A finalist in the 2019, 2020 and 2021 NATSIAAs at the Museum and Art Gallery of the Northern Territory, Timo was the overall winner in 2021. The judges noted that ‘Timo Hogan is a remarkably confident artist with talent that exceeds his age and experience’. Timo paints Lake Baker. A very sacred country that his father introduced him to at a young age. It would be 35 years before he would return. Timo is the custodian of the story of this land, only a small part of which he can share in his art.”

March 31, 2022
Blood sculptures that melt in the warm air on opening night, chewing gum soldiers that visitors tread across the gallery floor and jaffas that melt into hair gel are all exchanges of substances that are part of the process in Tim Silver’s artworks. To Edward Colless they form a poetic theme of sickening, contaminating love like the kiss of a vampire.
END_OF_DOCUMENT_TOKEN_TO_BE_REPLACED
https://artcollector.net.au/wp-content/uploads/2022/03/Tim_Silver-1_1-800q.jpg 531 531 AdrianaBorsey https://artcollector.net.au/wp-content/uploads/2021/11/Art-Collector-logos-transparency-WHITE-1080x1080px-2.png AdrianaBorsey2022-03-31 15:44:352022-03-31 15:44:35Artist Profile: Tim Silver

March 31, 2022
Makinti Napanangka, now over 70 years old, paints on the ground in the open air hunched over her canvas, her brushstrokes confident and instinctive. The efforts of her day’s work are eagerly sought by institutions and collectors all over the world. Jennifer Isaacs visited this prominent desert painter’s remote home base at Kintore, to watch her work.
END_OF_DOCUMENT_TOKEN_TO_BE_REPLACED
https://artcollector.net.au/wp-content/uploads/2022/03/Makinti2-800-sq.jpg 545 545 AdrianaBorsey https://artcollector.net.au/wp-content/uploads/2021/11/Art-Collector-logos-transparency-WHITE-1080x1080px-2.png AdrianaBorsey2022-03-31 15:25:222022-03-31 15:25:22Artist Profile: Makinti Napanangka

Dane Mitchell: Grappling with the ineffable
Scroll to top