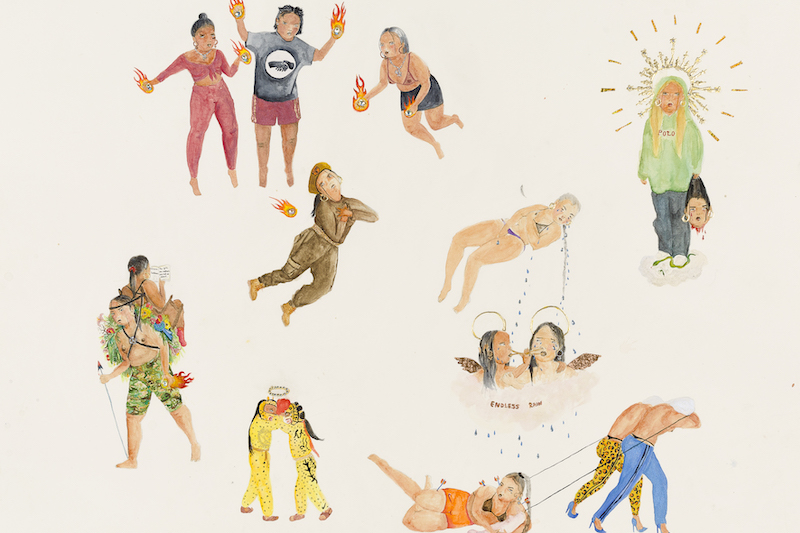 What Next?: Claudia Nicholson

Kate Britton introduces the work of artists you should put on your radar.

The last two years have been big for Colombian- born, Sydney-raised Claudia Nicholson. She’s currently in the Sulman Prize, and in residence at Carriageworks’ Clothing Store studios. Last year, she won the prestigious NSW Visual Arts Emerging Fellowship and received critical acclaim for her work in The National. She was a finalist in the 2017 UQ self-portraiture prize, and this year she has so far exhibited at the Australian Centre for Contemporary Art and Next Wave in Melbourne, Art Month Sydney, and as part of Sydney’s iconic queer club night, Monsta Gras.

WHAT DOES SHE DO?

Nicholson’s work spans painting, installation, video, performance and the mercurial point between all these things. Particularly impactful have been her alfombra de aserrín (sawdust carpets), and silletas (wearable objects made from fresh flowers).

Both these types of works draw on her Indigenous Colombian heritage, bringing to these traditional cultural objects a new perspective. Being adopted out of Colombia and raised in Australia, she is both deeply connected to and removed from these traditions. In exploring this identity, Nicholson plumbs both Latin American and Western culture. The result is personal, playful, and densely referenced.

“For me, the creation of the silletas is an act of devotion. I use these artisanal practices in an ongoing attempt to situate myself in a history from which I am separate but enamoured by.”

Nicholson will be travelling to Los Angeles and Mexico as part of her NSW Fellowship later this year. You can see new work she is producing for Campbelltown Arts Centre’s forthcoming 30th anniversary exhibition, We are all connected to Campbelltown (one way or another), running from 11 August to 14 October 2018.