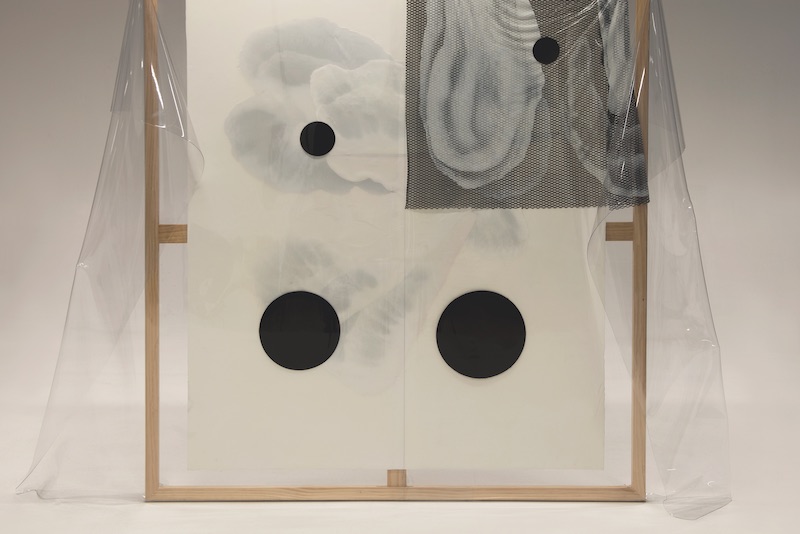 Christian Lock’s practice is a journey
of experimentation. His latest works push the boundaries of painting.

Christian Lock needs just the right mix of music and the appropriate level of caffeine to be able to work in his studio. “I have to listen to atmospheric, spacey stuff – Radiohead, the XXs, Grizzly Bear – that you can tune out to while focussing on making art,” says Lock. As to the coffee, well, he’s a four to six cups a day guy. “I need more coffee as I get older,” he says ruefully.

Right now Lock’s working towards completing his forthcoming solo show with Paul Greenaway Gallery in Adelaide. He usually has a few paintings on the go at one time and, as we speak, he says he has completed six and will probably have another half dozen ready for the exhibition. Working in series is a way for Lock to think through the paintings, solve problems and find solutions. “I find that paintings feed off each other and I’ll put a painting on the wall or floor and start on another, and when I come to solve a problem in one, I can apply that to an earlier work.” For the artist, the works have to have a level of spontaneity, improvisation and so, like a band, having it all happening at the one time is a way to see all the works as a cohesive whole.

Lock has been making and exhibiting since the late 1990s. While he was in his last year of art school in 1999 he won the EVA Emerging Visual Artists Award Major Painting Prize co-judged by his future dealer Paul Greenaway, and went on to pick up a number of other awards including in 2002 the Oscart Awards Rising Star Award, and in 2012 a Samstag International Visual Arts Scholarship. Lock, now 44 years old, is in a delicate career position, no longer an emerging artist but, according to admirers of his work, now maturing into a seasoned painter.

Applying the term painting to what Lock now creates proposes a number of conceptual leaps. Drawing inspiration from surf culture and street art, Lock’s work has evolved from abstract paintings that explored colour, surface and depth on canvas to the exploration of the same ideas but now utilising plastics, paint skins and stretchers, in works that could just as easily be called sculpture. “I’m interested in the idea that painting can move back and forth between being an object and an image,” says Lock. “To me, painting is a material process – even with oil paint you’re sculpting with a brush. I like to be able to tie the two together.”

For Lock, the new work is a logical extension of what has come before, unified by a belief that making art should be as much a surprise for the artist who made it as it is for the viewer. “I’m still really interested in the history of abstraction and the language of painting but exploring new hybrids, using new materials and elements – and it’s an experimental practice,” he says. “It’s a way of creating something that I haven’t seen before, and being inventive with image making – creating something that is unfamiliar and fresh and using established elements of abstraction and painting and extending.”

Influenced in part by the work of fellow Adelaide painter and Greenaway Gallery stable artist Paul Hoban, Lock explores the process of making his work as a way of producing unexpected elements. “The process starts by pouring biomorphic forms on to a type of HDP plastic that you can paint on to and then peel it off,” he explains. “I cut them up and reconfigure them in a more experimental way. This led me to put the forms on to clear plastic, and others are skins that are placed on PVC plastic, which is layered on to the stretcher. You can see that the plastic hangs off the canvas and that is a kind of frame. The picture plane extends off the structure and so I can have geometric shapes or forms that go beyond the support and the structure, and then you get a connection with the wall and the architecture of the room.”

The road to the new work has been all about experimentation with the processes of painting while questioning the status of painting as an object. In hands of many artists, this is a purely academic activity. In Lock’s, it brings the work alive in unexpected ways. “There are basic formal elements that I’m playing with – abstraction, illusion, texture, depth etc,” he says. “I was looking for freedom and the ability to create something new. Although you can add and subtract on canvas, this new work on plastic allows more freedom and invention. If I see something contrived, I feel like I’ve failed. I want to see something that’s going to surprise me. You’re wrestling something random and irrational into a state of harmony.”

“I first encountered Christian [Lock]’s work with [artist] George Popperwell, when we judged the EVA Award in the 1990s,” recalls Paul Greenaway, who has represented Lock’s work since the late 1990s. “Christian was in his last year of art school and we were both convinced he was a standout artist and the winner of that prize. It was after that that I invited Christian to show at the gallery.”

Greenaway has observed the evolution and experimentation in Lock’s work, and it is this will to change and try out different things that appeals to the gallery director. “Christian doesn’t rest on his laurels, there’s a sense of experimentation all the time and I enjoy that,” he says. “Back when he joined the gallery the paintings were quite different. He’d made surfboards, and used resin in forms quite reminiscent of boards, exploring the use of colours and resin, with these huge, big suspended brushstroke. The works were huge and heavy and weighty. He went off on that tangent and came back to painting. Paul Hoban, who is a wonderful artist, has been a great influence on Christian’s work.”

An artist continually trying out new things presents a challenge for collectors. How do they respond to changes in the work? “They don’t,” says Greenaway frankly. “There’s a gap in an artist’s career when they’re lauded by their peers, and then by adventurous curators, but then it takes time for collectors and institutions to ratify the work by buying it. For Christian, who is no longer an emerging artist but not yet established, it’s hard for people to catch up. They like … predictability. We don’t have a lot of collectors who collect in depth.” The new works in the forthcoming show will be between $7,000 and $10,000 each.

Long fascinated by Christian Lock’s work, Tracey Lock-Weir quickly explains that, despite the similarity of their surnames, they are not otherwise connected. “I’ve had that discussion with Christian,” she says with a laugh. “There’s along and complicated history of Locks in South Australia but we’re not related.”

To Lock-Weir’s eye, the elements of surf and street cultures found in Lock’s paintings are significant. “I think his work is really interesting in the way [it] explores the relationship between pop culture and fine art,” she says. “You get the sense that surf design and aerosol art has been a big influence. Christian seems to have an acute appreciation for painted surfaces and for application techniques. He’s interested in the way the paint goes on to a surface and then enters it. “Lock-Weird acquired one of Lock’s paintings for the Art Gallery of South Australia collection in 2005 and another of the more recent pieces. “We were the first major institution to acquire his work,” she says. “What they remind me of is Sandman cars, and the aerosol and meticulous detail of those designs, you can see that translating into the work. He has an almost obsessive compulsive approach to detail, a really meticulous approach, not in a distancing way, but in attractive way.” Lock-Weir rates the artist’s painting as among the best work by Adelaide artists. “I think he’s one of our moist interesting artists and contemporary painters,” she says. What is it about the works that attract her? “His compositions are balanced within a millimetre, a line and a colour or tone, it’s all hanging together like a spider web, so delicate. It’s beautifully composed. That’s why his works really hold me, they hold the eye, they’re very pleasing.”