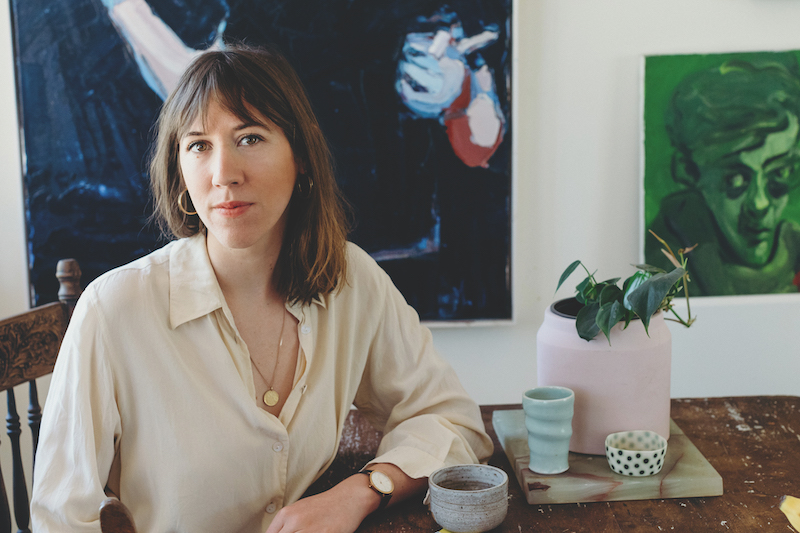 Clara Adolphs often bases her paintings on old photographs and images from the newspaper but in Too Early to Sleep, her solo exhibition at Chalk Horse in Sydney last year, it was holiday snaps.

Clara Adolphs often bases her paintings on old photographs and images from the newspaper but in Too Early to Sleep, her solo exhibition at Chalk Horse in Sydney last year, it was holiday snaps. The centrepiece was a large painting of the same name. A line dragged through wet paint marked the crags of a mountain ridge. Below it, patches without any paint at all told of the bright snow on its slopes – making Too Early to Sleep feel like an over-exposed photograph; an artefact from someone else’s life.

There was a strange, conflicted nostalgia to this Sydney exhibition. When there were figures, Adolphs’ painterly style rendered them in terms of gesture: an impatient man turning to the camera, women wading gingerly into a cold lake. Again, there was a conscious lack of detail; we might wonder about the lives of these strangers, but the limitations of such thinking turns us towards the impermanence of our own.

Adolphs has been exhibiting for just over 10 years and many of her past series also deal with this need to think aboutthepastwhileacknowledgingthe fraught nature of the task. Her confident handling of both medium and subject matter has earned her a strong follow- ing, both at home in New South Wales and further afield. Her first Queensland solo exhibition was presented by Edwina Corlette Gallery in 2017 and all 24 works sold. In late 2017, Adolphs spent time in Central Queensland as Artspace Mackay’s artist in residence. The result- ing exhibition of 14 works, mostly land- scapes, found homes with “receptive locals, as well as interstate and international collectors who had been following her practice since the August show”, says gallery director Edwina Corlette.

It was the same story again at the Sydney Contemporary art fair in 2018, where both Edwina Corlette and her Sydney gallery Chalk Horse took multiple pieces as part of group exhibitions. Chalk Horse co-director James Kerr says the advance interest in these works fuelled the response to Too Early to Sleep, with all 10 works selling before the exhibition opened. (One of these was snapped up by Artbank for its collection.)

Kerr believes one reason for the broad interest in her paintings might be the variety of projects and exhibition contexts for Adolphs’ work over recent years, including an exhibition at the Sydney offices of Clayton Utz, winning the Eva Breuer Travelling Art Scholarship in 2017 and the Brett Whiteley Travelling Art Scholarship in 2015. Her work has also appeared in award exhibitions around the country, including the Archibald, Portia Geach, Mosman and Paddington art prizes.