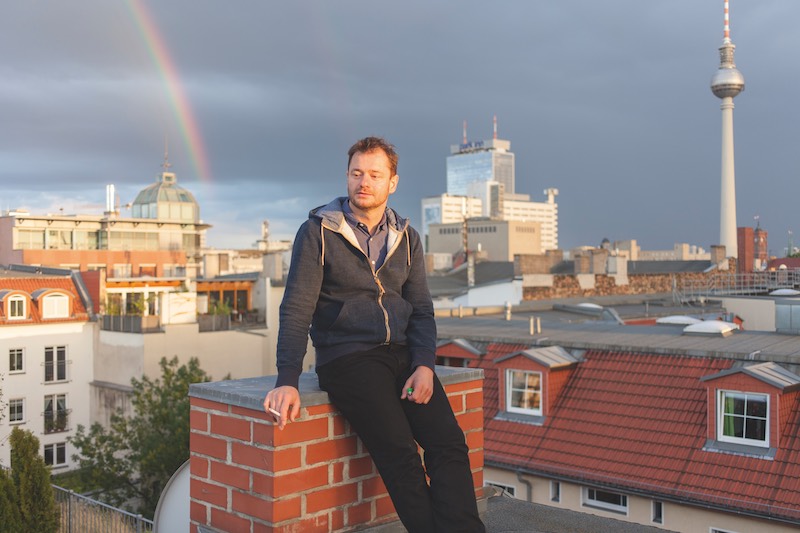 Clemens Kraus: The doctor is in

A fully qualified medical doctor and psychoanalyst, Clemens Krauss’ practice is informed by his ability to intersect art and science.

In an era where highly specialised skills are seen as the key to success, Clemens Krauss is something of an anomaly. Like Leonardo da Vinci, the quintessential exemplar, Krauss is a polymath; his talents cannot be confined to just one field. Like any good Renaissance man, the Austrian-born, Berlin-based artist speaks more than one language. And like many artists he started early. “As a young teenager I developed my first video films,” he says, “footage which I’m still using now for actual video art projects.” And while it is not unusual for contemporary artists these days to seek inspiration from the sciences, Krauss doesn’t just dabble. He is a fully qualified medical doctor and psychoanalyst.

But Krauss is first and foremost a painter, performer and maker of videos. “I’m a full time artist, who is interested in the notion of the physical; the inter-relational; the social, cultural and political; generational and trans-generational transfer,” he explains. “Medicine and psychoanalysis are very helpful world-describing models. So I see these parts of my curriculum as part of my artistic training.”

In fact, Krauss undertook training in psychoanalysis specifically so that he could realise his performance work Sprechstunde / Con-sultation Hour, in which he offers his services as a professional therapist within the context of an art institution. Krauss describes this work, which has been performed at venues around the world including Stockholm, Liverpool, Berlin and Oslo, “as a social relation between the artist and the viewer, implementing methods and language of psychoanalytical theory and practice.” He continues: “Psychoanalytical notions such as transference and counter-transference between the analyst (artist) and the analysand (viewer) become an invisible meta-process during the evolution of the artwork.” These sessions are private and not recorded. There is nothing for other gallery visitors to see, thus, as Krauss points out, “confounding the borders and rules of an art institution”.

The intersection between art and science is overt in Sprechstunde / Consultation Hour, but it also permeates the artist’s paintings in more subtle ways. Krauss is known for his depiction of figures rendered in very thick globs of paint. The effect is almost visceral: the bodies he paints swirl and swell, hinting at anatomical mysteries writhing beneath the surface. They protrude from the canvas and, like bodies, they inhabit three-dimensional space. Roland Nachtigaeller, artistic director of MARTa Herford, a contemporary art museum in Germany, describes his approach as “surgical”, while Krauss himself admits: “Paint is not only colour, but matter.”

In his solo show, Friction, at Dominik Mersch Gallery in Sydney, Krauss uses both paintings and videos to continue his ongoing exploration into both the human mind and the human body. “My interest in the human mind is my interest in social constellations, forces of attraction and aversion, within the individual and within the social collective; what we call society, culture and political friction,” he explains. “Social collectives are constituted by physical human interactions; the interaction of bodies. Starting from the human body, frictions and predetermined breaking lines within social structures are the core interest of the current work. Fleeing, migrating, surviving, trans-generational transfer, distribution and the notion of balance or justice are objects of observation.” These concerns are played out in paintings that capture people in difficult situations. Krauss stages these scenes in what he calls “decontextualised environments” from contemporary political hotspots. What this means is that the architecture and backgrounds are elided and all that remains is the bodies. Ironically, these absences reveal as much as they conceal.

In Untitled I (from the series Friction) I, 2015, a woman in a headscarf peers through a round portal. In doing so she also appears to be at the centre of a target. There is no boat in the painting, yet her refugee status seems clear. As Krauss says, “It remains a symbol: who is afraid of whom?” A similar effect is achieved in The Untranslatability of ‘Die offene Gesellschaft ist nicht ganz dicht’, 2015, in which several people attempt to breach invisible European borders. “These are the referred frictions of societies I’m talking about,” Krauss says. “My response is much more perplexed than cynical. In that respect I’m not interested in treating patients, but in treating spectators.”

March 31, 2022
Blood sculptures that melt in the warm air on opening night, chewing gum soldiers that visitors tread across the gallery floor and jaffas that melt into hair gel are all exchanges of substances that are part of the process in Tim Silver’s artworks. To Edward Colless they form a poetic theme of sickening, contaminating love like the kiss of a vampire.
END_OF_DOCUMENT_TOKEN_TO_BE_REPLACED
https://artcollector.net.au/wp-content/uploads/2022/03/Tim_Silver-1_1-800q.jpg 531 531 AdrianaBorsey https://artcollector.net.au/wp-content/uploads/2021/11/Art-Collector-logos-transparency-WHITE-1080x1080px-2.png AdrianaBorsey2022-03-31 15:44:352022-03-31 15:44:35Artist Profile: Tim Silver

March 31, 2022
Makinti Napanangka, now over 70 years old, paints on the ground in the open air hunched over her canvas, her brushstrokes confident and instinctive. The efforts of her day’s work are eagerly sought by institutions and collectors all over the world. Jennifer Isaacs visited this prominent desert painter’s remote home base at Kintore, to watch her work.
END_OF_DOCUMENT_TOKEN_TO_BE_REPLACED
https://artcollector.net.au/wp-content/uploads/2022/03/Makinti2-800-sq.jpg 545 545 AdrianaBorsey https://artcollector.net.au/wp-content/uploads/2021/11/Art-Collector-logos-transparency-WHITE-1080x1080px-2.png AdrianaBorsey2022-03-31 15:25:222022-03-31 15:25:22Artist Profile: Makinti Napanangka