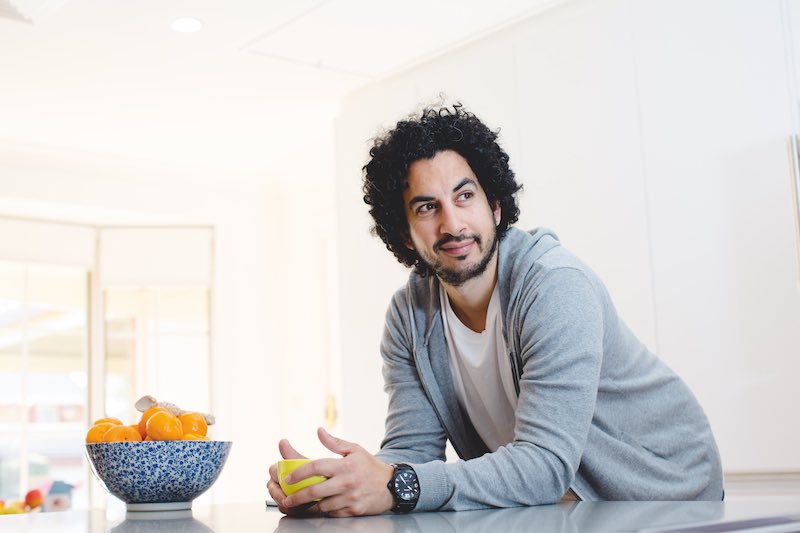 With an appetite for experimentation and a thirst for historical knowledge, Huseyin Sami isn’t your garden-variety painter.

Huseyn Sami is a painter who gave up using brushes many years ago. He decided instead to pour paint directly onto the canvas, straight from the tin. Then he became really experimental. His work has since involved the following: painting with his feet while his upper body is bandaged in a beige, plastic straight jacket; building three-dimensional timber structures, some using bubble-wrapped shelving and dripping paint through a range of puncture holes; and finally, just as you think he’s abandoned it forever, he returns to the brush, but at the end of an astonishing nine-metre handle that requires the handling skills of a shark-fisherman. He admits it was “almost impossible to control”, but that’s what gave it its unique mark-making abilities.

Sami is an international artist, born in London of Cypriot parents. He’s lived in Australia since the age of five. We meet in a bar on Oxford Street in Sydney, just before the Jim Lambie opening at Roslyn Oxley9 later that evening. He is enthusiastic about Lambie’s attitude to paint and the materials he works on. “I loved the way he smashes colour across mattresses and other three dimensional objects. And how there would be these amazing reflections happening around the gallery as the spectator physically walks around the space.” He also speaks excitedly about a range of other contemporary artists around the globe. “We are now in this post-historical position where we can look back on so much and learn from it. When I see a Lambie mattress I also think back to Rauschenberg and the paint-covered mattresses he made. Or Brice Marden, using sticks and twigs instead of brushes and creating these amazing calligraphic marks with them.”

I wonder who else he looks at in the increasingly popular expanded field of painting? “Gary Hume was one of the first big surprises for me. Katharina Grosse’s painting installations and actions were a big pull, as are the aluminium floor works of Adrian Schiess. But I especially enjoy the discipline that Bernard Frize brings to his painting series. The older I get, the more I realise that life is about time management and all the different things that need to be placed into that framework – family, employment, studio.”

Most of Sami’s studies were undertaken at Sydney College of the Arts. David Griggs and TV Moore were a year or two ahead of him. He is generous, and quite specific, in his praise for different staff members and visiting artists that he met there. “Matthys Ger-ber taught me a lot about seeing my work in a national and international context, and how to navigate those worlds. Mikala Dwyer really made me think in all sorts of different ways. And John Nixon taught me the importance of being in the studio every day and having a strong work ethic. Too many artists wait until they have a show coming along and then start making work for it. I’m always thinking about art, so I always try to be making art. Some work fits better with a commercial gallery space and other work can use the experimental nature of an artist-run-space or a museum project space. There is always something to make.”

Six months stationed at Modern Art Oxford in the United Kingdom was an important time for Sami, giving him access to both London and Europe. “I was there early 2006,” he says, “making small works, researching and looking at as much art as I could. I would travel back and forth to London and make small trips to Europe as well. I saw a great Kippen-berger show at the Tate, which was fantastic. I’d never seen such a large body of his work before, I’m a really big advocate of his works and more importantly his attitude toward art making. There was also a great small show of Simryn Gills at the Tate and Rachel Whiteread had a huge immersive installation of white cast boxes in the turbine hall. it was all very impressive. After this time, I headed to Japan to commence my residency at the Centre for Contemporary Art in Kitakyushu.”

As he prepares for his forthcoming exhibition at the light-filled Sarah Cottier Gallery in Paddington – where later in the day I will have the great pleasure of seeing his recent two-and-three-dimensional creations unwrapped – I remember the first time I saw his work at one of Sarah Cottier’s previous spaces, over a decade ago. Fittingly, it was in a group exhibition curated by Gerber. Sami was still a student at SCA and he built one of his first “painting machines” in the gallery. It was a layered structure of pegboard that allowed up to five different paintings to be created simultaneously. “I’ve been making these machines now for over 10 years. I like their quasi-mechanical nature. I like how you pour the paint and it cascades down, pulled by gravity. Each iteration of new work and new techniques depends on the size of the space I am working in. It’s not always possible to make a painting with a nine-metre brush, for example. The new work I am making for Sarah centres around the question: ‘How do I paint?’ It is probably a question I will spend the rest of my life answering.”

March 31, 2022
Blood sculptures that melt in the warm air on opening night, chewing gum soldiers that visitors tread across the gallery floor and jaffas that melt into hair gel are all exchanges of substances that are part of the process in Tim Silver’s artworks. To Edward Colless they form a poetic theme of sickening, contaminating love like the kiss of a vampire.
END_OF_DOCUMENT_TOKEN_TO_BE_REPLACED
https://artcollector.net.au/wp-content/uploads/2022/03/Tim_Silver-1_1-800q.jpg 531 531 AdrianaBorsey https://artcollector.net.au/wp-content/uploads/2021/11/Art-Collector-logos-transparency-WHITE-1080x1080px-2.png AdrianaBorsey2022-03-31 15:44:352022-03-31 15:44:35Artist Profile: Tim Silver

March 31, 2022
Makinti Napanangka, now over 70 years old, paints on the ground in the open air hunched over her canvas, her brushstrokes confident and instinctive. The efforts of her day’s work are eagerly sought by institutions and collectors all over the world. Jennifer Isaacs visited this prominent desert painter’s remote home base at Kintore, to watch her work.
END_OF_DOCUMENT_TOKEN_TO_BE_REPLACED
https://artcollector.net.au/wp-content/uploads/2022/03/Makinti2-800-sq.jpg 545 545 AdrianaBorsey https://artcollector.net.au/wp-content/uploads/2021/11/Art-Collector-logos-transparency-WHITE-1080x1080px-2.png AdrianaBorsey2022-03-31 15:25:222022-03-31 15:25:22Artist Profile: Makinti Napanangka