With sell-out shows in 2021, these artists were clearly collector favourites of the year.

Sydney-based painter Holly Greenwood likes to spend time in pubs. Those compact watering holes in urban nooks and country towns where the smell of wood and hops hangs heavy in the air and the gaudily patterned carpet is sticky with age and spilled drinks.

Pubs and the people who linger there are frequently referenced in Greenwood’s paintings. She paints them in a thick expressionistic style, generous with her brushstrokes yet knowing when to hold back. In September 2021, her most recent solo exhibition Paintings From the Front Bar was presented at James Makin Gallery, Melbourne. The majority of these paintings sold before they made it to the floor.

“Demand for Holly’s work is incredible,” says founding director James Makin. “We have a long waiting list of keen admirers. I’m excited to see Holly’s profile rise even further in the coming years.”

Writing about Paintings From the Front Bar in the artist statement, Greenwood recounted the experience of working on site at the Bank Hotel in Dungog. “It’s a daunting experience to enter a country pub at first because you instantly stick out – especially if you aren’t a proper local. I would go to the corner or front bar, get my paints out and order a beer.” Using gouache and pastel to create this body of work, Greenwood went on to explain her creative process. “The constant ebb and flow of people coming in and out of the pub is stimulating, making me work quickly and freely. I will often chat to people too, asking them about their lives as they ask me about mine. All while moving the paint around.”

In 2019, she was awarded a Hill End Residency at Murrays Cottage near Bathurst. Steeped in gold mining history, the location provided Greenwood with rich subject matter and while there, she painted the residents of nearby communities. In works like Before the Storm, Hill End Pub, 2019 a group of people sit outside at dusk, trees billowing in front of storm clouds. Greenwood captures the easy comradery of pubgoers in such a way one can almost hear the muffled conversation.

Another consistent subject for Greenwood is the Australian landscape. Drawn to the brown and red hues of landlocked paddocks and the ghostly shells of dried out gumtrees, north-west New South Wales contains a number of Greenwood’s road trip destinations – Broken Hill, Mutawintji National Park and Gundaroo. While traveling, she closely observes the sunburnt pockets of native bushland and spends time capturing the light and shadow shifting across the landscape.

Greenwood will make her art fair debut at Sydney Contemporary in 2022 and is also slated to stage her next solo exhibition at James Makin Gallery in August. As Makin puts it, “Holly is a fantastic rising artist. She’s focused, driven, making incredible work, and collectors can’t get enough. It’s attention that’s very much deserved.” 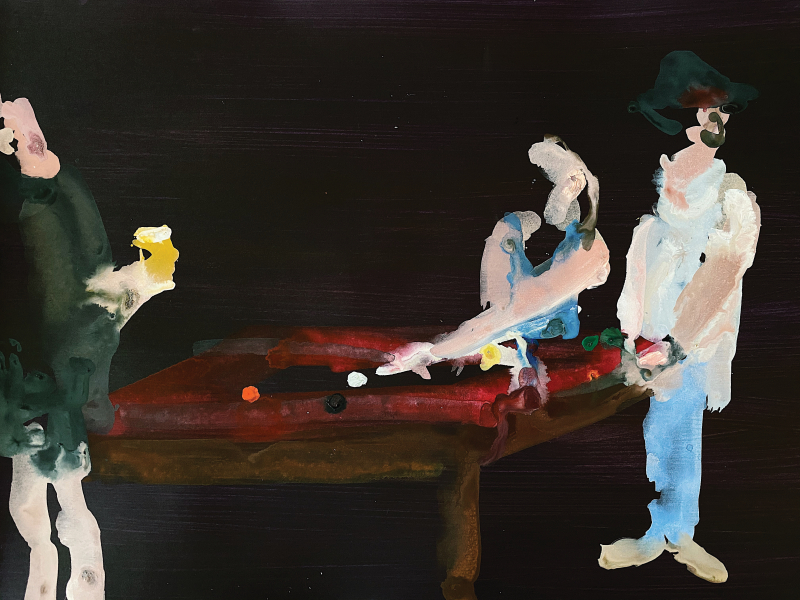