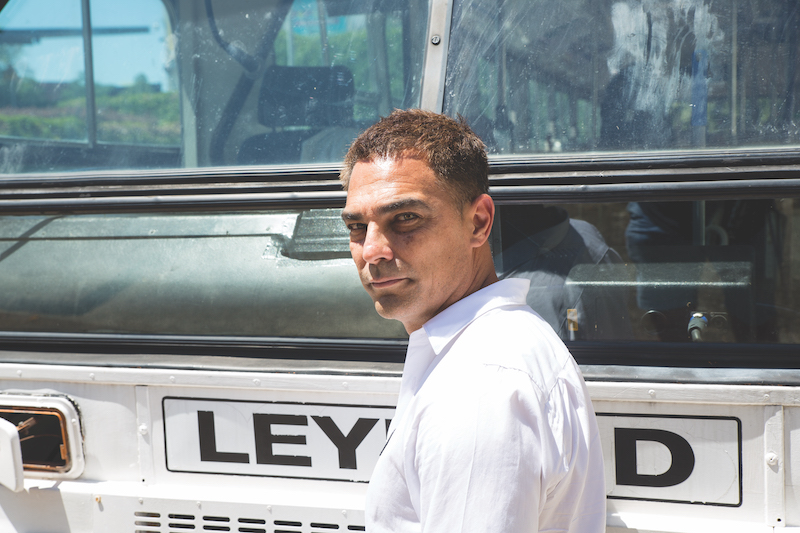 Michael Cook: Keeping up with the Joneses

Michael Cook’s latest photographic series mines the inherent racism toward Indigenous people, and the impact of materialism on community.

Michael Cook’s new photographic series Livin’ the Dream canvasses our expectations of ordinary. With the backdrop of a remote Indigenous community in Australia, a nuclear family – Joey Jones, his wife, and two kids (all Aboriginal) – appear to have been catapulted into a living situation at odds with their expectations. Nonetheless, the Joneses have all the possessions that an aspirational family may expect – a luxurious 1963 EH Holden, a swimming pool, barbeque, smart clothes and a caravan.

The first image, Sold, is a block with a letterbox and the archetypal kidney-shaped suburban swimming pool – but the dwelling is a few sticks that support a roof over a lounge chair and electric lamp. The next, Welcome Home, shows the family in front of a neat and modest house, the car parked beside with an old bedframe in the front yard. The six images move through ordinary suburban milestones for a contemporary family – a barbeque, a birthday event. In the second last image, Vacation, they assemble near the car to go on holiday, but the family appears uncomfortable, their interactions staged and unhappy. The last image, For Sale, suggests the collapse of the dream, with Joey Jones alone in front of a small rudimentary house, contemplating the scene (but visibly more relaxed).

Cook has made and shown art for 10 years, following a career as a commercial photographer. His images challenge racism and the expectations associated with Aboriginality. It canvasses the ongoing inequities that began with colonisation, highlighted again in the failure of the Closing the Gap report (2020) to identify significant progress.

While his imagery is driven by an exploration of his own Aboriginal identity, and has a discernible political edge, the way Cook constructs photographs creates a beautiful and seductive aesthetic that draws viewers close. Cook says, “The image begins with an idea and then I use photographic layers to build aesthetic depth. A series of images unfolds to make a narrative. Within these series, meaning is not prescribed but left open to interpretation.”

Livin’ the Dream is Cook’s first series of work since Invasion (2018). It will be presented at the inaugural Paris Photo New York – which was postponed from its April date due to the coronavirus pandemic – with Cook’s Melbourne gallery This Is No Fantasy and exhibited later this year back in Melbourne. This series is driven by the saying “Keeping up with the Joneses” and flags the impact of materialism on community, but also value judgements about, and inherent racism toward, Indigenous people.

Cook is aware that Aboriginal people in remote communities are sensitive to the views of others about the way they live and feel pressure to conform to outsiders’ perceptions. Yet he is also aware of the strength of community in these remote places, its ability to support and nurture both people and place, and has experience of this connection himself during his early life in Hervey Bay.

In this series, however, Cook is also concerned with consumer culture. Connections between people, and the central importance of community, may be eroded by a growing interest in status and objects. Cook says, “Everyone’s trying to live the dream, trying to keep up with the Joneses. While this series has an Indigenous historical aspect, it may resonate with any culture experiencing social pressure to live up to certain expectations, especially concerning consumption.”

These images displace “The Joneses” from their city environment (albeit accompanied by their material possessions), with Cook acknowledging the disruption to Aboriginal people caused by removal from their own countries in the 20th century. The impact of displacement is visible in the discomfort evident in this Aboriginal family. Australia’s Indigenous populations continue to be affected by the results of this historic displacement and other impacts of colonisation, with the damage caused by transience also marked in populations affected by the current global diaspora. Cook’s images are located in remote Australia, but the connection of identity to place is universal.

In Cook’s decade of practice since the release of In My Eyes (2010), he has created images drawing on Australian history that upend perceptions of Aboriginality, with his first three series of photographs acquired by the National Gallery of Australia. Since then, he has won significant prizes, been included in major international exhibitions, and exhibited all over the world. His rapid career progression will be acknowledged later this year, with a major solo exhibition surveying 10 years of his work titled Undiscovered at the USC Art Gallery, Sunshine Coast, in June. Cook is also represented by Andrew Baker Art Dealer in Brisbane.

March 31, 2022
Blood sculptures that melt in the warm air on opening night, chewing gum soldiers that visitors tread across the gallery floor and jaffas that melt into hair gel are all exchanges of substances that are part of the process in Tim Silver’s artworks. To Edward Colless they form a poetic theme of sickening, contaminating love like the kiss of a vampire.
END_OF_DOCUMENT_TOKEN_TO_BE_REPLACED
https://artcollector.net.au/wp-content/uploads/2022/03/Tim_Silver-1_1-800q.jpg 531 531 AdrianaBorsey https://artcollector.net.au/wp-content/uploads/2021/11/Art-Collector-logos-transparency-WHITE-1080x1080px-2.png AdrianaBorsey2022-03-31 15:44:352022-03-31 15:44:35Artist Profile: Tim Silver

March 31, 2022
Makinti Napanangka, now over 70 years old, paints on the ground in the open air hunched over her canvas, her brushstrokes confident and instinctive. The efforts of her day’s work are eagerly sought by institutions and collectors all over the world. Jennifer Isaacs visited this prominent desert painter’s remote home base at Kintore, to watch her work.
END_OF_DOCUMENT_TOKEN_TO_BE_REPLACED
https://artcollector.net.au/wp-content/uploads/2022/03/Makinti2-800-sq.jpg 545 545 AdrianaBorsey https://artcollector.net.au/wp-content/uploads/2021/11/Art-Collector-logos-transparency-WHITE-1080x1080px-2.png AdrianaBorsey2022-03-31 15:25:222022-03-31 15:25:22Artist Profile: Makinti Napanangka