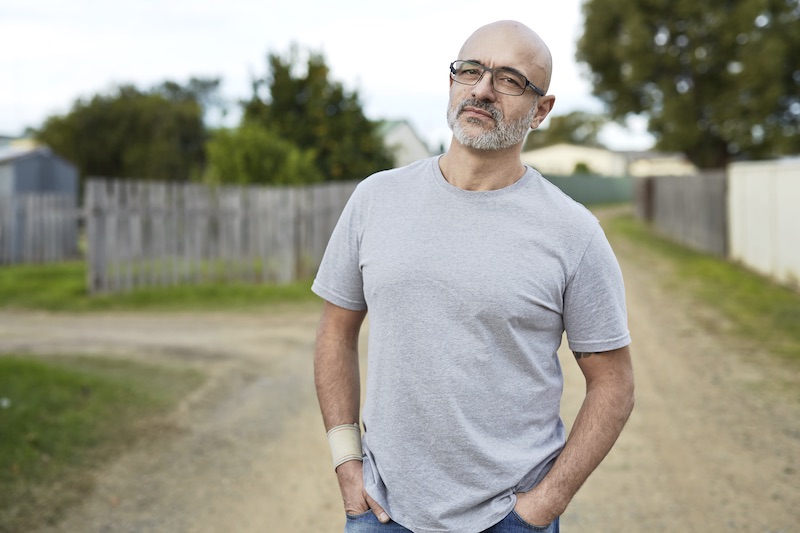 Spanish-Australian artist Dani Marti weaves a delicate, biographical thread through all of his works.

Dani Marti is remarkable in a number of ways. An urbane Spanish man, he prefers to live in the working – class town of Cessnock in regional NSW and spend extended periods in the equally blue-collar Scottish city of Glasgow than the inner-city cultural hubs of Sydney or Melbourne; he only decided to become a full-time artist at age 40, just more than a decade ago; he’s an artist whose practice is equally focused in two disparate fields; and he’s managed to achieve that rare combination of early commercial success and long-standing critical recognition.

The constant refrain about Marti’s work is that it trades in the genre of portraiture. It’s certainly true that his ‘paintings’ (woven wall works that sit at the intersection of painting, sculpture and installation) have involved a biographical element. As he says: “Individuals and my emotional reading of them were always my starting point to make those woven paintings.” These three-dimensional pieces have, at times, been inspired by particular people (reflected in their titles like ‘Linda’ and ‘George’); even their materiality is suggestive of intimate human relations such as the use of rope and leather that recall acts of bondage.

These works were the basis of his practice for the first few years but, in 2004, when he decided to com-mit to being an artist full-time, he had the urge “to go somewhere deeper and somehow uncomfortable/challenging”. “I had to get away from the isolation of the studio practice and touch and experience deep human emotions, stories and flesh”, he says.

The result are videos that, even more overtly, seem to function as ‘portraits’: depictions of men, some-times literally stripped bare, exposing their personal lives. However, these works are not windows onto reality in the way traditional portraiture is under-stood. Marti’s work instead renders transparent the constructed nature of the genre. The recurring narra-tives of sexuality, intimacy, the body and identity that run through these quasi-ethnographic depictions are disrupted by a tension the artist creates –  between fact and fiction, representation and abstraction – through a repetoire of cinematic techniques. While the films have the pared-back, monochromatic look of the documentary genre, Marti also employs the tricks of story-telling such as slow motion and the close-up to ambiguous and unsettling effect.

In his most widely renowned work, Bacon’s dog, it is now well-known we are witnessing the ecstatic but vulnerable state of a fleshy, middle-aged man – renowned art collector Peter Fay – in the wake of a series of intimate encounters with the artist and after a lifetime of latency. As a viewer, the exquisite honesty of this revelation and its depiction is almost too much to bear. But on reflection we are left with a nagging feeling about the ‘truth’ of this experience. What does it mean for an artist to be intimate with his subject then coax him to spill his innermost feelings about it on camera for public consumption?

It is hard not to be bothered by such ethical questions. Marti’s subjects have included a chronic meth addict, a homeless man slipping into unconsciousness from substance use and a blind shut-in. Is he just using people for the sake of his art? Marti is unapologetic about his approach:

“The deep nature of ethics is fluid;  it is confused with far too much morality and social/cultural baggage. As an artist I am giving myself permission to question those preconceptions by putting myself in a position where those boundaries become less defining…It is only by truly being present in that moment and with a deep respect for my subject that I can walk that territory – free from a sense of who I am and  where I am coming from. I’m embracing the exchange with no judgment and it is during that exchange that me and the subject can negotiate a new set of boundaries.”

In other words, there is no conceit that the artist is taking an ‘objective’ stance on his subjects – he is deeply, often literally, implicated in the action. Marti makes himself as vulnerable as the people in his work and in doing so complicates the inherent power differential between artist and subject.

As viewers, we are left to confront the tension between the voyeuristic attraction we feel of seeing what is generally unrepresented in a filtered, photoshopped media culture and our repulsion by the sometimes ugly reality of this. This is ultimately what makes Marti’s work so important in the broader scheme of contemporary art in Australia and internationally. By representing the unrepresentable in such an unsentimental way – an ageing man’s sexualised body, a meth addict’s trance-like state, a blind man’s desire – Marti shifts the burden of the ethical questions that need to be asked, uncomfortably, unflinchingly, from artist to viewer.

March 31, 2022
Blood sculptures that melt in the warm air on opening night, chewing gum soldiers that visitors tread across the gallery floor and jaffas that melt into hair gel are all exchanges of substances that are part of the process in Tim Silver’s artworks. To Edward Colless they form a poetic theme of sickening, contaminating love like the kiss of a vampire.
END_OF_DOCUMENT_TOKEN_TO_BE_REPLACED
https://artcollector.net.au/wp-content/uploads/2022/03/Tim_Silver-1_1-800q.jpg 531 531 AdrianaBorsey https://artcollector.net.au/wp-content/uploads/2021/11/Art-Collector-logos-transparency-WHITE-1080x1080px-2.png AdrianaBorsey2022-03-31 15:44:352022-03-31 15:44:35Artist Profile: Tim Silver

March 31, 2022
Makinti Napanangka, now over 70 years old, paints on the ground in the open air hunched over her canvas, her brushstrokes confident and instinctive. The efforts of her day’s work are eagerly sought by institutions and collectors all over the world. Jennifer Isaacs visited this prominent desert painter’s remote home base at Kintore, to watch her work.
END_OF_DOCUMENT_TOKEN_TO_BE_REPLACED
https://artcollector.net.au/wp-content/uploads/2022/03/Makinti2-800-sq.jpg 545 545 AdrianaBorsey https://artcollector.net.au/wp-content/uploads/2021/11/Art-Collector-logos-transparency-WHITE-1080x1080px-2.png AdrianaBorsey2022-03-31 15:25:222022-03-31 15:25:22Artist Profile: Makinti Napanangka