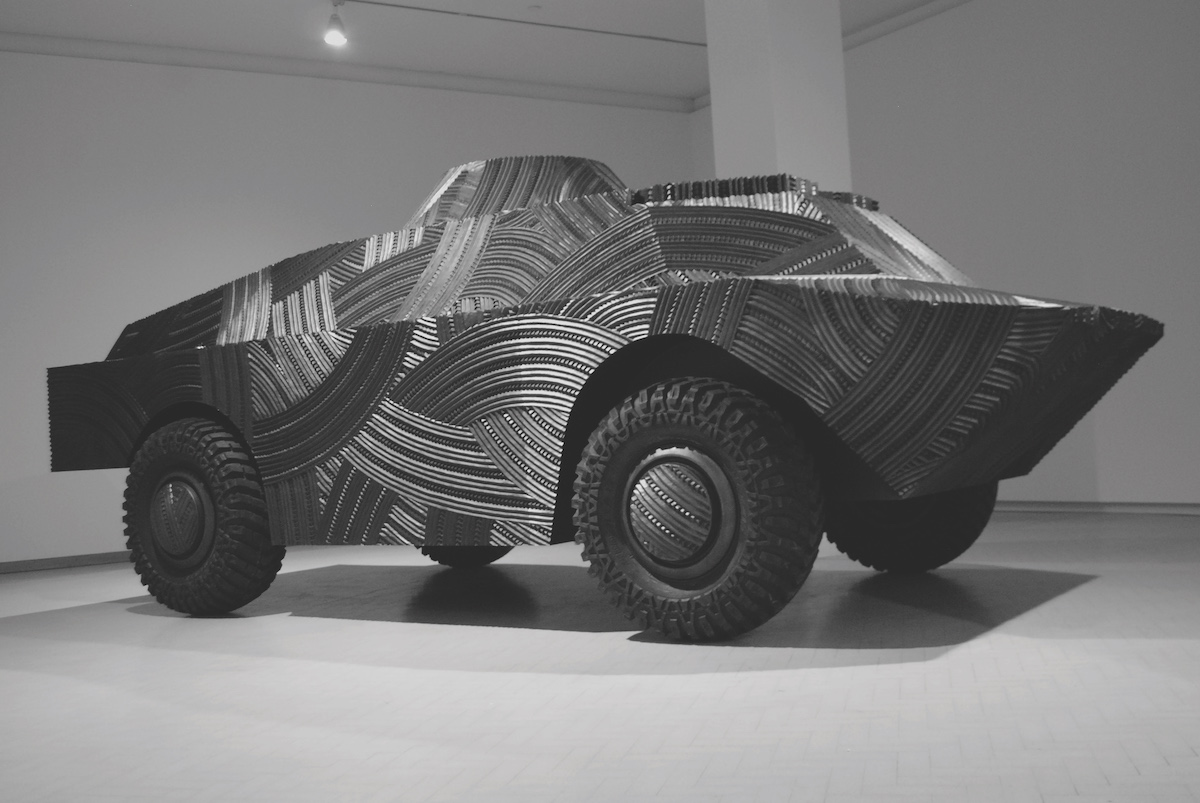 Graham’s exhibition history is as extensive as it is international, reflecting study, residencies and engagement with other Indigenous peoples and systems of knowledge across Australia, Aotearoa New Zealand, the Pacific and Turtle Island in North America. Highlights include his collaboration with Rachael Rakena (Ngāi Tahi, Ngāpuhi), representing New Zealand at the 52nd Venice Biennale (2007). Or his sculpture TE HŌKIOI (2008) shown at the 2010 Biennale of Sydney. More recently, in 2017, his work was represented at the Honolulu Biennial, Middle of Now Here, in Hawaii.

Graham tells the stories of his family history, iwi (tribal) histories, Māori mātauranga (knowledge) and tikanga (lore) through a range of appropriated technologies. His work is monumental in both scale and technique; entering Gallery 1, viewers will be dwarfed by his 10-meter-high work Nui, while in Gallery 3, O Pioneer reveals how his craftsmanship can turn even a gun turret into a beautiful object, seducing the audience with its “wedding cake” aesthetics. Graham’s big objects tell big, complex stories, weaving together tales of invasion, weaponry, war, peace, assimilationist policies, intermarriage, miscegenation, indigenous resistance, and survival.

During February to March 2021, Graham is also in the opening group exhibition at Alison Bartley’s new space on Garrett Street in Wellington. The exhibition, called Recalibrating, also includes work by Joyce Campbell and Lonnie Hutchinson. According to Bartley, the exhibition “re-presents historic work by the three artists who explore non-western world views and the suppression of Indigenous histories”.

In 1992, Graham said that his works were “dedicated to the Indigenous peoples of the world, whose cultures have sprouted, flowered, and then withered in the Winter of colonisation.” Perhaps, almost 20 years later, his work is proof that through the practice of First Nations artists and artisans, Indigenous cultures may yet see the Spring.

March 31, 2022
Blood sculptures that melt in the warm air on opening night, chewing gum soldiers that visitors tread across the gallery floor and jaffas that melt into hair gel are all exchanges of substances that are part of the process in Tim Silver’s artworks. To Edward Colless they form a poetic theme of sickening, contaminating love like the kiss of a vampire.
END_OF_DOCUMENT_TOKEN_TO_BE_REPLACED
https://artcollector.net.au/wp-content/uploads/2022/03/Tim_Silver-1_1-800q.jpg 531 531 AdrianaBorsey https://artcollector.net.au/wp-content/uploads/2021/11/Art-Collector-logos-transparency-WHITE-1080x1080px-2.png AdrianaBorsey2022-03-31 15:44:352022-03-31 15:44:35Artist Profile: Tim Silver

March 31, 2022
Makinti Napanangka, now over 70 years old, paints on the ground in the open air hunched over her canvas, her brushstrokes confident and instinctive. The efforts of her day’s work are eagerly sought by institutions and collectors all over the world. Jennifer Isaacs visited this prominent desert painter’s remote home base at Kintore, to watch her work.
END_OF_DOCUMENT_TOKEN_TO_BE_REPLACED
https://artcollector.net.au/wp-content/uploads/2022/03/Makinti2-800-sq.jpg 545 545 AdrianaBorsey https://artcollector.net.au/wp-content/uploads/2021/11/Art-Collector-logos-transparency-WHITE-1080x1080px-2.png AdrianaBorsey2022-03-31 15:25:222022-03-31 15:25:22Artist Profile: Makinti Napanangka

“I was in my second year of architecture, and my lecturer called me into his office and said ‘look, me and the other lecturers think you may have trouble getting through the course … your drawings are so messy, why don’t you try art school? They might like you there’.” No two artists’ stories are the same, yet, even so, the one that Noel McKenna is describing to me is a far cry from anything else that I’ve heard. “I took these tiny drawings to the art school. Everyone else was there with professional art portfolios, and I walked in and met the dean of the college with half a dozen of these ink drawings. And he said ‘Ah, they’re very weak Noel, very weak … but we’ll give you a go.’ That’s how I got into art school.”

Time has made a mockery of these assessments and the “weak” drawer who walked into Queensland College of Art more than four decades ago has gone on to become what his Melbourne gallerist William Nuttall describes as “the quiet maverick of the Australian art world”. Indeed, despite in some ways being an outsider, McKenna has made it inside Australia’s most esteemed public and private collections. His work can be found hanging in the National Gallery of Australia, the National Gallery of Victoria, the Art Gallery of New South Wales, the Art Gallery of South Australia and the Queensland Art Gallery… suffice to say that if the building has columns, a portico or swathes of sandstone, then the former winner of the Sulman Prize and the nine-time Wynne Prize finalist probably has some pieces inside.

Yet despite the grandeur of these surroundings, McKenna’s works retain an almost profound modesty. “It is difficult to find the right word, but generally I just say I respond to the everyday world I live in,” he says. “I have a general philosophy that you should be able to do a painting about anything, really, if it grabs your eye.” The works in his forthcoming show, End Street, reveal the artist’s uncompromising espousal of this very ethos. In one of his paintings, Rosie (2019), we find ourselves looking at a sparse room, an attentive dog and a man reading a newspaper, while in another work, Prudence (2019), a different dog stares directly at us. Despite the familiar nature of these scenes, there is a freshness to McKenna’s work and a conspicuous wiliness to test the boundaries of his own oeuvre. The artist’s new show for instance presents, alongside his paintings, a series of tables covered in ceramic tiles that animate the otherwise dormant surface with rich colours and idiosyncratic scenes.

A perennial feature of McKenna’s works are his animals. And when I first arrive at his front door for our interview, I’m reminded of this fact by the sound of scampering paws and excited barking. I can’t find the doorbell, but there isn’t any need as the sound of his two dogs – a loping greyhound called Melman and a squat mixed-breed fox terrier called Rosie – soon summon the artist. Sitting on his couch surrounded by the dynamic duo, he muses: “Maybe in some ways I get on better with animals than people. When I was young, I was quite an introverted person, so I used to form attachments to animals.” I ask him what animals have that humans don’t, and McKenna sits for a few moments considering my question. “It’s just that unconditional love I suppose. If you’re kind to your dog they’ll just return it back to you. People are complex, aren’t they? People can strategise and be manipulative and do lots of hurtful things to other people.”

The artist’s words capture some part of his works and their psychological dimensions, which lend a cerebral gravitas to what might otherwise be a kitsch subject matter. “It can be a tricky thing sometimes to paint animals. There’s a line between being cute and being insightful about the animal,” he observes. “I did one series of paintings about dogs and cats begging at the table for food. A lot of people said, ‘they’re so cute’, and I always said that for me they were very sad – because the animal is actually begging for food.” In McKenna’s work, animals are afforded the emotional specificity and depth that is typically reserved for the human sitter. The dog begging for food is not a saccharine scene, but a melancholic reminder of the distance between the animal that once hunted and the one that now meekly sits.

Noel hands me a photograph and I’m confused. “I photograph people’s Instagrams,” he tells me. “See, someone put up that photo, which is a pretty amazing photo of a cat coming out of the gutter. I think that when people are around their pets all the time, the pets kind of relax and they end up taking interesting shots.” He pauses. “You’d never see that shot in a book on cats; someone has to walk along the street and see the cat come out like that. There’s a certain unusualness about it. I haven’t done a painting of that yet. I may one day.” I’m confused because the object that I’m holding appears to be a film photograph of an Instagram image. It’s an absurd thing, an anachronism that somehow manages to collapse both the analogue and the digital into one another; and it’s kind of wonderful. It somehow manages to describe McKenna perfectly: a man who engages in our brave new world without any hesitation, yet does so in a manner that is undeniably his own. The quiet maverick of the Australian art world.

March 31, 2022
Blood sculptures that melt in the warm air on opening night, chewing gum soldiers that visitors tread across the gallery floor and jaffas that melt into hair gel are all exchanges of substances that are part of the process in Tim Silver’s artworks. To Edward Colless they form a poetic theme of sickening, contaminating love like the kiss of a vampire.
END_OF_DOCUMENT_TOKEN_TO_BE_REPLACED
https://artcollector.net.au/wp-content/uploads/2022/03/Tim_Silver-1_1-800q.jpg 531 531 AdrianaBorsey https://artcollector.net.au/wp-content/uploads/2021/11/Art-Collector-logos-transparency-WHITE-1080x1080px-2.png AdrianaBorsey2022-03-31 15:44:352022-03-31 15:44:35Artist Profile: Tim Silver

March 31, 2022
Makinti Napanangka, now over 70 years old, paints on the ground in the open air hunched over her canvas, her brushstrokes confident and instinctive. The efforts of her day’s work are eagerly sought by institutions and collectors all over the world. Jennifer Isaacs visited this prominent desert painter’s remote home base at Kintore, to watch her work.
END_OF_DOCUMENT_TOKEN_TO_BE_REPLACED
https://artcollector.net.au/wp-content/uploads/2022/03/Makinti2-800-sq.jpg 545 545 AdrianaBorsey https://artcollector.net.au/wp-content/uploads/2021/11/Art-Collector-logos-transparency-WHITE-1080x1080px-2.png AdrianaBorsey2022-03-31 15:25:222022-03-31 15:25:22Artist Profile: Makinti Napanangka