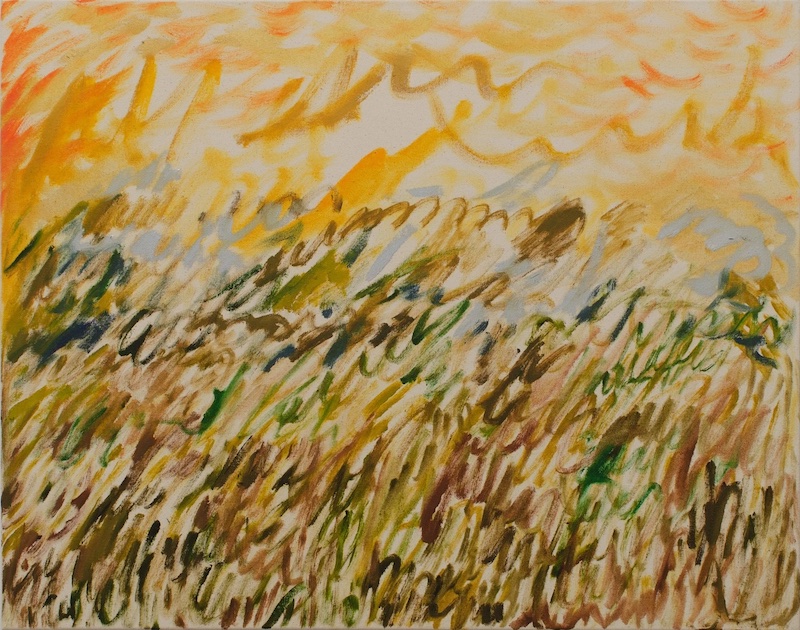 Ruby Wilkinson is the latest artist to join Jhana Millers Gallery, Te Whanganui-a-Tara/Wellington. The announcement comes off the back of the artist presenting her first solo exhibition ‘Sun Room’ at the gallery in August-September, and prior to that, winning the New Zealand Paint and Printmaking award in April this year.

A recent graduate of Massey University School of Art, the Pōneke-based artist draws inspiration from the environment around her – in particular the rugged South Coast of Te Whanganui-a-Tara.

Wilkinson enjoys the fluidity of painting and how it can engage with the sensation of movements and feelings, creating works that are gestural and emotive. Her earthy colour palette references aspects of the environment that she holds dear – the early morning dawn, the ripple of waves on the ocean, and  the dense native bush around Titirangi where she grew up.

On her exposed canvas and linen works, heavy outlines are frequently juxtaposed against flowing clusters of looping lines, alongside soft, feather-light brush strokes. These works exude an acute sense of immediacy, motion, and irrepressible spontaneity.

Wilkinson is also inspired by the Japanese practice of forest bathing, or shinrin-yoku: a way of taking in and connecting with nature through the senses, which, unlike exercising, has aimlessness at its heart. With their dynamic character, her paintings prompt viewers to present and acutely sensate, if only for a moment.

Most recently, Wilkinson collaborated with local company Yu Mei to produce a series of custom-painted handbags for the launch of their Spring Summer 22 collection.