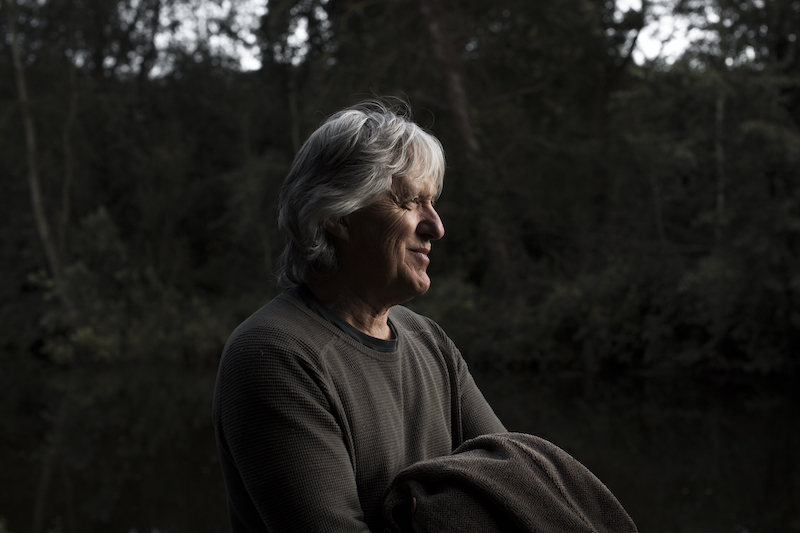 Tracey Clement explores how John Walsh bridges the divide between the realms of fantasy and reality and of past and present with compelling verisimilitude.

Gazing a ta painting by John Walsh is like teetering on the edge of an event horizon. Once you are enveloped in one of the Wellington-based artist’s scenes the laws of classical physics no longer apply. Walsh seems able to conjure up images from the multiverse, an infinite zone of possibility in which conventional notions of both space and time become meaningless. Take for example his small 2017 painting on paper, Flying Moa. In this work Walsh pictures a world where long extinct flightless birds take to the sky. It’s a work of pure fantasy, steeped in myth and magic. Yet, simultaneously, his streaky turquoise and teal landscape is firmly tethered to the actual physical presence of the wild weather and dense bush of New Zealand. It is incontrovertibly a portrait of place, a picture of reality.

This ability to bridge the divide between two worlds (fact and fiction, fantasy and reality) with compelling verisimilitude is Walsh’s great strength as a painter. It is tempting (if somewhat simplistic) to attribute this facility to the fact that Walsh himself comes from two very different cultural traditions. He is of Maori (Te Aitanga-a-Hauiti) and Irish- New Zealand decent. Real life, of course, is more complex, as Walsh explains.

“Growing up in my small East Coast community of Uawa [Tolaga Bay] these influences weren’t analysed. They were just there, constant and normal,” he says. “Those formative years have never left me. I naturally fell into the Maori arts movement, it politicised and polarised, but I could never deny who I was. I was never pure enough to be fully in one camp or the other. This has had its difficulties and great freedoms.”

Born in 1954, Walsh describes himself as “one of those kids who could draw.” He enrolled to study art at Ilam in Christchurch, but didn’t complete the course. “Art school wasn’t for me,” he recalls, “I was probably too young.” Back home in Uawa, he gained valuable experience working with his father painting houses. “I learned a lot about how paint works from those years,” he says, “brush work, quality, care, etc.” And he taught himself to paint portraits in the style of the well-known New Zealand painter Charles Frederick Goldie (1870-1947). “Eventually I decided I didn’t want a future of copying, so I experimented until I realised my sketchy preliminary painting was my thing,” he explains. “I was almost 40.”

Walsh’s signature “sketchy” style reflects his fast-paced fluid working method. The artist may start with an idea, but he doesn’t use working drawings. Instead, Walsh leaves space for chance and improvisation. “Someone once described it as jazz painting,” he says. “We all have our different skills, experiences and concerns, and the way I work they all find their way onto the canvas whether they’re there with the initial idea or not. I might start with an idea, a very loose idea, and it evolves with the marks, the colours, composition and adventure. It’s quite a quick process so it’s all engrossing.”

The paintings themselves may happen fast, but, as mentioned earlier, the end results seem to tell stories that defy a linear sense of time. In Walsh’s work past, present and future all appear to hold sway. In State Asset, 2012, he presents a landscape of vertiginous misty mountain peaks and roaring waterfalls, primeval and pristine. It could also be a current advertisement for New Zealand tourism. After all, purity is the state asset. But take a closer look and it becomes clear that the scenic waterfalls are coming from melting glaciers. This painting documents global warming in action. It is sublime in the true sense of the word, both terrible and beautiful. Walsh is a subtle artist with something to say. As he puts it, “Life on earth is becoming critical and everyone is gradually waking up to this.”

In Migrating Koru, 2003, huge dinosaurs with human heads and tails that resemble the spiral of an unfurling fern (the koru of the title) stride across a watery mythic landscape. This painting captures the fantastical edge that Walsh is so adept at evoking. Yet here too he speaks to contemporary reality. “I mix old stories, gods and other beings with current issues, it’s all seamless and sensible to me,” he says. “Cultural difference in this age of homogenised big business is important. It gives connection to the ‘other,’ to hope.” John Walsh says he is storyteller at heart, even if only to himself. “Mine is a particular history with its own cultural influences, loves and hurts,” he explains, “I don’t expect viewers to understand everything I do.” But, having said that, he also acknowledges that art is a unique and powerful medium for getting a message across. “Circumstances change, and you either roll with them or take a stand,” he says. “Different parts of the brain are activated when making and viewing art. Painting is visual communication.”

Since closing the doors of his eponymous Wellington gallery in 2013, Mark Hutchins-Pond has worked as Contemporary Art Curator at Pa- taka Art + Museum in Porirua City, New Zealand. Last year he curated Matakite, a rich survey of painter John Walsh’s most significant works from the decade spanning 2006 to 2016. Hutchins-Pond writes that the exhibition was titled with the “name Maori give to a visionary, one with second sight who perceives life in translucent, overlapping layers of time and space.” This feels an appropriate entrée into the densely layered – both materially and philosophically – paintings of John Walsh. With their distinctive scrubby brushwork, aqueous blue-green palette and softly glowing surfaces, Walsh’s paintings have a distinctly ethereal mood. Hutchins-Pond describes the works as “painted dreams which seem to want to recon nect with an ancient, less complicated existence, a time when humans were intrinsically connected to natural and supernatural forces.” In these works, it is not only the material qualities which render them dreamlike: as Hutchins-Pond tells us, “nothing is quite as it seems. Walsh presents ideas for viewers to explore, often working through them on the canvas. 3. His language is endearing, intriguing, poetic, sensuous and mysterious. Contemporary issues are presented by ancient beings who come with their own stories while older issues are presented by sweet young lovers.” Furthermore, by gesturing towards both Maori and Irish myths and evoking the sensory qualities of the New Zealand landscape, Walsh’s mystical vistas manage to speak to a multitude of viewers; “the eerie settings for his densely layered narratives are usually non-specific yet strangely familiar.” – Lucinda Bennett

“I first saw John’s work in a show at the City Gallery, Wellington called Parihaka. The gallery had reached out to a cross section of artists to make Parihaka based paintings.” Says John Gow, co-director of Gow Langsford Gallery, who was stopped in his tracks at the sight of John Walsh’s two contributions to the show. “The impact of encountering these works led me to call Walsh and ask if he would like representation in Auckland. As a result, we have now represented John for the past 16 years.”

“The works in the Parihaka show were of a larger scale than I had seen before measuring at around 80 x 120 cm.” Gow continues. “Prior to these, I was only aware of Walsh working in a small scale. As time has evolved John has made a series of very major works some measuring up to 5 metres in length. The artist has continued to explore the same or similar narratives of Maori mythology, significant historical events often caught only in the verbal Maori history and what I refer to as his dreamtime paintings.”

The forthcoming show at Gow Langsford, will showcase works priced from NZD $7,500 up to $55,000. “Walsh has a wide group of collectors who support his practice. This along with museums (particularly Te Papa Tongarewa, Wellington) tends to be his client base. There is usually keen competition for the key works in his exhibitions. I know I have my eye on one work in this collection.” Of its appearance on the secondary market, the director says “People seem to hold on to Walsh’s work so not a lot hits the secondary market,” notes Gow, however “When it does, the works are usually well supported at auction or sold again by Gow Langsford Gallery. – Emma O’Neill

March 31, 2022
Blood sculptures that melt in the warm air on opening night, chewing gum soldiers that visitors tread across the gallery floor and jaffas that melt into hair gel are all exchanges of substances that are part of the process in Tim Silver’s artworks. To Edward Colless they form a poetic theme of sickening, contaminating love like the kiss of a vampire.
END_OF_DOCUMENT_TOKEN_TO_BE_REPLACED
https://artcollector.net.au/wp-content/uploads/2022/03/Tim_Silver-1_1-800q.jpg 531 531 AdrianaBorsey https://artcollector.net.au/wp-content/uploads/2021/11/Art-Collector-logos-transparency-WHITE-1080x1080px-2.png AdrianaBorsey2022-03-31 15:44:352022-03-31 15:44:35Artist Profile: Tim Silver

March 31, 2022
Makinti Napanangka, now over 70 years old, paints on the ground in the open air hunched over her canvas, her brushstrokes confident and instinctive. The efforts of her day’s work are eagerly sought by institutions and collectors all over the world. Jennifer Isaacs visited this prominent desert painter’s remote home base at Kintore, to watch her work.
END_OF_DOCUMENT_TOKEN_TO_BE_REPLACED
https://artcollector.net.au/wp-content/uploads/2022/03/Makinti2-800-sq.jpg 545 545 AdrianaBorsey https://artcollector.net.au/wp-content/uploads/2021/11/Art-Collector-logos-transparency-WHITE-1080x1080px-2.png AdrianaBorsey2022-03-31 15:25:222022-03-31 15:25:22Artist Profile: Makinti Napanangka