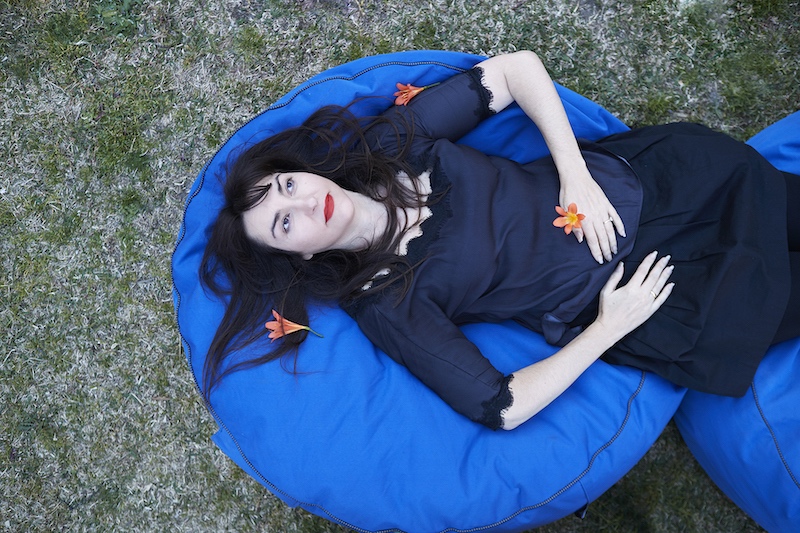 Nike Savvas wishes to bring attention to the viewer’s relationship with perception, and how it might shift and change in response to an environment.

Nike Savvas is a senior Australian artist, based between Sydney and London. She is well known for her large-scale, immersive, colourful, participatory installations that have been staged both in Austra- lia and internationally. Recent career highlights include her solo exhibition Rally, at the Art Gallery of New South Wales, Sydney, in 2014, her solo Liberty and Anarchy, at Leeds Art Gallery, UK, from 2012-2013, and her work is included in collections including Victoria & Albert Museum, the British Library, the Tate Gallery Library Art Gallery of New South Wales and Auckland Art Gallery, among others.

In addition to important museum exhibitions and collections, Savvas has also produced several respected public art projects, often site-responsive in nature. Yet, as an artist, she keeps us on our toes, once we think we know Savvas, she re-positions herself again as an artist to keep things fresh and exciting. On this, she says, “I like to surprise people, to be mercurial. I don’t like to be categorised. As soon as people start deciding what my work’s about or classifying it, I will do something completely different to turn it on its head.”

Indeed, Savvas actively employs surprise as a strategy in her practice. Conceptually, Savvas positions herself as a democratic artist, because of her interest in the role of the viewer in her work. Her upcoming exhibition Living on a Promise opens at ARC ONE Gallery on the 24 October this year. This exhibition will focus on the age of uncertainty, a timely subject. Savvas wishes to bring attention to the viewer’s relationship with perception, and how it might shift and change in response to an environment. She says, “The show is about the constructive and changing perceptions of the individual. It’s highly optical and works with colours that play off each other. It is extraordinary, what you can produce in the lab when experimenting, and placing one colour next to the other, working with all sorts of perceptual effects. The pieces in the show are deliberately small in scale but they’re huge in effect because of the optical play that they create.”

The upcoming show at ARC ONE Gallery, the artist explains, “will consist of a number of standalone works that optically activate the space within striated lines of vertical colour.” The suite of work builds on the Savvas’ in-depth archival research at The Museum of Modern Art, New York focusing on the historical exhibition famous for its staging of Op Art, The Responsive Eye held in 1965. The exhibition also draws from complex mathematical equations, systems of logic, perception based optics and colour frequencies. It will be an immersive experience that seeks to dismantle the perceptual register of the viewer.

Besides Savvas’ upcoming ARC ONE exhibition, the practitioner has recently been announced as a participating artist for the next Adelaide Biennial Divided Worlds, curated by Erica Green. The exhibition opens in March 2018 and features the work of 30 Australian artists such as Daniel Boyd, Emily Floyd and Lindy Lee, working across photography, painting, sculpture, installation and the moving image. Beyond this, I am confident that Savvas will continue to inspire critical thinking, immersive experiences and thoughtful engagement all while keeping us on our toes.

Rachel Kent first encountered the work of Nike Savvas in the 1990s, through her exhibitions at Sydney independent spaces and at Roslyn Oxley9 Gallery in Paddington. She recalls, “in particular her anodised aluminium and styrene installations from that period, and some of the early X-Ray works. I have followed Savvas’ career since and wrote for her 2012 monographic publication Nike Savvas; Full of Love Full of Wonder by Black Dog Publishing, London.”

“Savvas’ work has always been about colour, light and movement – a sense of vibrant opticality – and I find this endlessly compelling, both visually and psychologically. There is a long global history of artists who have explored the transformative qualities of colour, and of movement. Through her works, Savvas combines a strong awareness of art history, as well as an engagement with popular culture, from street carnivals to decorations and buntings.”

Kent recalls the artist’s “two major commissioned works at the Art Gallery of NSW in recent years – her vast, room-scale installation of multiple, tiny vibrating spheres called Atomic: full of love, full of wonder in 2005; and recently, her suspended work in the main entry foyer, called Rally, which comprised around 60,000 sewn strips of coloured bunting, suspended from the foyer ceiling (2014). I saw both projects and remember well how visitors responded to them, with surprise, joy and of course wonder. There was a real sense of play in these works as well as spatial awareness and public engagement.”

The curator emphasises the artist’s significance in the broader Australian cultural landscape, particularly, “in terms of her engagement with light, colour and kinetic practice, creating gallery works, museum commissions and large-scale public installations. As she moves regularly between Sydney and the UK, where she completed her studies and exhibits regularly, her reputation extends beyond local shores and she is part of a wider global dialogue. To see Australian artists positioned centrally in this dialogue is very important, and in turn draws attention to the work of local practitioners by international curators and museums.” – Emma O’Neill

The upcoming exhibition at ARC ONE Gallery in Melbourne will feature, “six magical sculptures of the same dimensions and price. Each work will be priced at $18,000,” says ARC ONE Gallery director Suzanne Hampel. It has been more than a decade since Hampel first sighted the work of Nike Savvas at ACCA in the 2005 show Atomic: Full of Love, Full of Wonder and found herself mesmerised, “Nike immediately stood out as an artist with an exceptional vision and capacity to activate space and immerse an audience.”

Since then, the artist’s “exhibiting career has developed internationally in tandem with a continued presence in Australia” with numerous significant shows in London, Cologne, Dusseldorf and Amsterdam. Her dynamic installations and commissions have attracted much local and world- wide attention. Such commissions include Epic 8000, Nike Town, San Francisco; Rally Art Gallery of New South Wales; Everlasting, Docklands, Melbourne; Colours are the Country, Macquarie Group, Sydney; and Reverie, Southbank Centre, London. The artist has also garnered the Jury Prize (Gold Medal) at the 11th Triennial of India, Delhi and various Fellowship Awards. Most recently she has received a grant to produce a large installation in the Art Gallery of South Australia for the 2018 Adelaide Biennial.

According to Hampel, “Savvas’ works convey a playfulness and radiance, making them simply uplifting and joyful to live with. She employs a vivid palette and repeated geometric forms in her practice, which resonates with collectors both in Australia and abroad who love contemporary manifestations of colour, light and geometry, either in spectacular installations or sculptural works.” – Emma O’Neill

Nike Savvas’ Living on a Promise will exhibit at Arc One Gallery, Melbourne from 24 October – 25 November, 2017.

Teresa Baker: A Practice Shaped By Spirits
Scroll to top