For one so young, Nithiyendran is clearly an artist over-ripe with ideas and how they connect to materials, process, creation and display.

As much as the Australian art world maintains a strong ecology of support for emerging artists, it is rare that one literally jumps straight from university into relative art-stardom. That is the case for Ramesh Mario Nithiyendran, whose provocative sculptural practice was picked up commercially by Sydney’s Gallery 9 soon after making quite the splash with a number of solo and group shows in a very short space of time.

Already a steady recipient of art prizes and grants, 26-year-old Nithiyendran most notably took out the highly competitive and often contentious NSW Visual Arts Fellowship (Emerging) at Artspace in Sydney in October 2014, among a strong group of 12 finalists. Formerly the Helen Lempriere Travelling Art Scholarship, in the past the trend has been to award the opportunity to an artist who has entered several times, or who is becoming borderline established in their practice. In that sense it was refreshing to see the prize go to an absolute newcomer.

Nithiyendran will use the award to return to his native Sri Lanka to research a new body of work. He says: “I want to focus on the ways in which Western imperialism and colonialism has impacted Hinduism and the way that has transformed various sculptural representations.”

Primarily working in ceramics, a medium experiencing a significant renaissance in Australia, Nithiyendran’s renegade practice is populated with phallic totems and deities, anthropomorphic creatures and strangely abject monsters that reference and subvert the iconography of religion, art history, popular culture, porn and the internet. He relates the materiality of clay as a return to the trace of the artist’s hand in the production of art and also as bound within a mythologised tradition of creation. “If we locate ceramics in Christian discourse as clay, it’s God literally making man with his hands. In the West at least, there is an idea that clay is present in every body and that with anything ceramic, the sense of the hand is amplified.”

For one so young, Nithiyendran is clearly an artist over-ripe with ideas and how they connect to materials, process, creation and display. His work to date delights in different ways: some are frank penis- obsessed eruptions of a young artist’s ambition and bravado; others are more subtle, with sly humour that draw you in with their bling but leave you with a sting.

Glenn Barkley agrees. Well known for his love of ceramics as both curator and practitioner, the 2015 artistic director of Art Month Sydney and former senior curator at the Museum of Contemporary Art says: “Nithiyendran is working with clay in a really physical and visceral way that challenges some of the good manners of craft production while also recalling the work of the Australian ocker funk artists of the 1970s like Margaret Dodd and Lorraine Jenyns. He has both a foot in the current contemporary obsession with clay while looking double-faced – like a figure in his work – to the past. By winning the NSW Visual Arts Fellowship (Emerging) a real turn in the fortune of ceramics is signalled, [ceramics are] now not a marginal but central art form. I think the promise of travel and working overseas for Nithiyendran is going to lead to really amazing work.”

This article was originally published in Art Collector issue 71, JAN-MAR 2015. October 8, 2020
Pat Brassington has established herself as one of the most important Australian artists working today.
END_OF_DOCUMENT_TOKEN_TO_BE_REPLACED
https://artcollector.net.au/wp-content/uploads/2020/10/Pat-Brassington-copy.jpg 800 800 Camilla Wagstaff /wp-content/uploads/2019/02/Art-Collector-Magazine-Online.jpg Camilla Wagstaff2020-10-08 13:39:132021-02-10 11:16:09Pat Brassington: Something beautiful & its antithesis 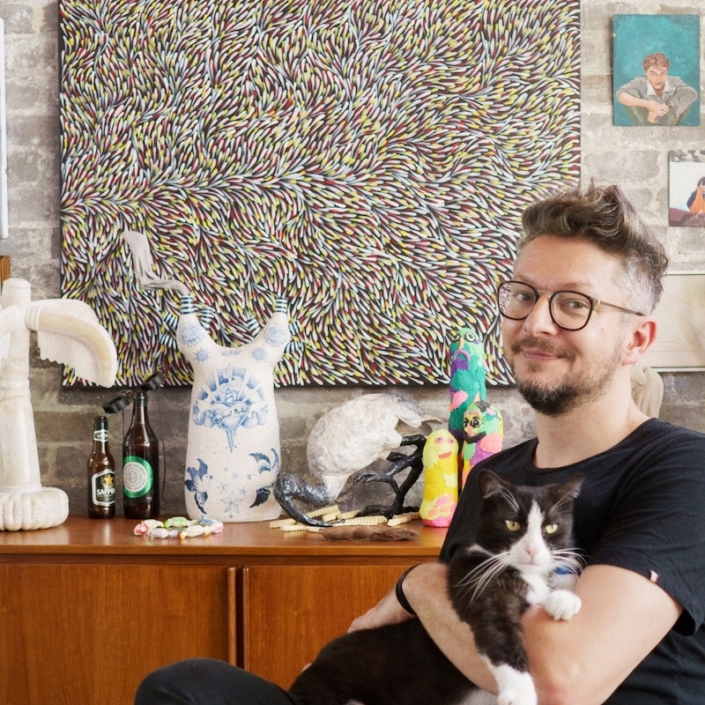 Tomislav Nikolic: On The World Stage
Scroll to top