Sam Cranstoun’s practice has focused on historical events, incidents and figures, which he says, “Often involves archival research as well as a process of compulsively collecting images to use as potential drawings or paintings.”

At the inaugural Elaine Birmingham National Watercolour Prize in February 2017 at Queensland College of Art the work of Sam Cranstoun in particular pulled me in with an almost magnetic force, which is quite something for a little watercolour. Holiday, oh holiday, 2016 seemed to speak directly to my innocent 13-year-old self, for whom Princess Diana was the defining figure of my generation. The work depicts Charles and Diana with the princes floating in a blue sea, against a striped background that mimics her skirt. The work is made all the more poignant because it was painted with water collected by the artist from the Princess Diana Memorial Fountain. At once sentimental and idolatry it is a witty retro celebration of a contemporary icon and though unassuming in scale – Cranstoun likes to retain the integrity of the found images – nonetheless packs a powerful punch with its meticulous detail and loaded content. The tension between scale and subject means that his images of David Bowie, Barack Obama or Princess Diana never tip over into mawkish territory but read more like rescued remnants from a not too distant history – sketches from the ever expanding contemporary arcanum.

Cranstoun’s practice has focused on historical events, incidents and figures, which he says, “Often involves archival research as well as a process of compulsively collecting images to use as potential drawings or paintings. Often what determines my subject matter is an almost attention deficit approach to the things I’m interested in everyday life – whether it’s triggered by a book, a movie, a TV show, a wikipedia entry. In that way, I think it’s a post-internet approach to making work. I’m interested in how images shape history, but I’m also interested in how the internet collects and distributes that imagery.” For a recent exhibition with Milani Gallery in Brisbane he made work around the assassination of Martin Luther King, while for GoMA Q in 2015 his subject was the late Lord Mountbatten, assassinated by terrorists in 1979.

“In the process of collecting tens of thousands of images as references for these series, I was left with a huge archive of unused and seemingly irrelevant imagery…I had the idea of limiting myself to the digital archive I had amassed, and making work that only drew on those images.” This process produced the subject material for an exhibition entitled Close enough: Young Queensland Artists at Caloundra Regional Gallery in early 2017, a series of pixelated watercolours on graph paper and for his forthcoming exhibition Power Structures for Sophie Gannon Gallery in September, a body of ‘collage’ oils on board. Cranstoun explains “I like the idea of the works being read as one collection of images, despite the individual elements themselves seeming to come from very disparate and incongruous sources.”

Indeed, the artist enjoys the absurdity of his visual pairings, in which he creates alternative histories even while he pays homage literally to the grid in art history. “One of the underplayed aspects of my work is humour. It’s something that often gets overlooked or isn’t considered a genuine or worthy reaction to the work.” Since graduating from QUT with honours in 2010 Cranstoun has exhibited actively and is working on a major suite that, suitably arcane, is about a Greek town-planner/architect/engineer called C.A. Doxiadis who emigrated to Brisbane (which has a prominent Greek community) in 1951. Surprisingly, little is known about his time in Australia. Cranstoun’s project seeks to change that. “It will incorporate various different media, including a series of text works based on the titles of books he wrote, drawings of pages from those books, diagrams from his text books, some of which are in watercolour and have been made using water that I’ve extracted from homegrown tomatoes that have been juiced and strained.” This nuanced touch goes to Cranstoun’s authenticity as a practitioner. It’s as obscure as his subject matter but makes marvellous sense at the same time, and means his work has been noted. He was highly commended in the aforementioned award and a finalist too in the 2017 Hazelhurst Art on Paper Award. Who said watercolour was for Sunday painters?

“Sam Cranstoun is from the first generation of artists who grew up with the Internet. For me, the significance of Cranstoun’s work comes from his examination of the authority of images and how they shape and reinforce historical and contemporary narratives, especially in the digital era. The dissemination and proliferation of images through the Internet and social media platforms including Facebook and Instagram means that our experience of images in the 21st century is almost always mediated by technology.

“Earlier this year I included Cranstoun in the exhibition Close enough: Young Queensland Artists at Caloundra Regional Gallery, which included the work of four artists whose practices engage with individual and collective ideas of history. For the exhibition, Cranstoun created a new work, Picture Elements 2016-17, a suite of 50 watercolours on grid paper drawing on his personal archive of more than 10,000 images gathered from google searches.

“By choosing to recreate images that are familiar, even when they are collaged, pixelated or abstracted, Cranstoun highlights how images are consumed in the digital age. The 1980s ‘Pictures Generation’ of artists including Robert Longo, Louise Lawler, Cindy Sherman is interesting to consider in relation to this.

“While Cranstoun’s approach to images is reflective of digital culture, his interest in a diverse range of historical and contemporary subject matter and technical ability mean his practice avoids a singular or simplistic reading. His intellectual curiosity and the conceptual rigour of his approach to art making, combined with his exceptional technical ability, makes his practice especially compelling and relevant.” – Paris Lettau

Sophie Gannon has been following Sam Cranstoun’s practice since his exhibition Geronimo! at Bus Projects in Melbourne in 2013. “I instantly found his play on different contemporary images to reconstruct our reading of history really compelling”, Gannon says. “His work provides an alternate approach to image making that is often highly realist, conceptually challenging, quite satirical and technically proficient. He is an outstanding technician.”

Gannon points out that Cranstoun’s practice has being going from strength to strength. He has twice been selected as a finalist of the Archibald, and in 2016 he was awarded the Artbank + QPAC commission, which Gannon says “gave him the opportunity to create a large scale work on paper for display in the Queensland Performing Arts Centre Playhouse in Brisbane.” The work will then be acquired by the prestigious Artbank collection.

Gannon has noticed a “considerable increase in the demand for his work amongst clients and greater attention from curators.” Alongside Artbank, works by Cranstoun’s are held by UQ Art Museum, QUT Art Museum, as well as significant private collections.

“The variety of mediums, themes and images that he explores through his practice,” Gannon notes, “also means that Cranstoun’s work is highly accessible. Smaller works on paper start from $800 while larger oil paintings fetch up to $15,000.” The kind of collector Gannon sees drawn to Cranstoun’s practice is “someone who gravitates towards realist painting, is interested in art history, pop culture and the influence of contemporary image making on broader society.” – Paris Lettau

An exhibition of Sam Cranstoun’s work entitled Power Structures will be exhibited at Sophie Gannon Gallery, Melbourne from 19 September – 7 October, 2017. 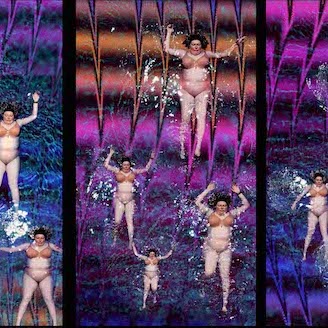