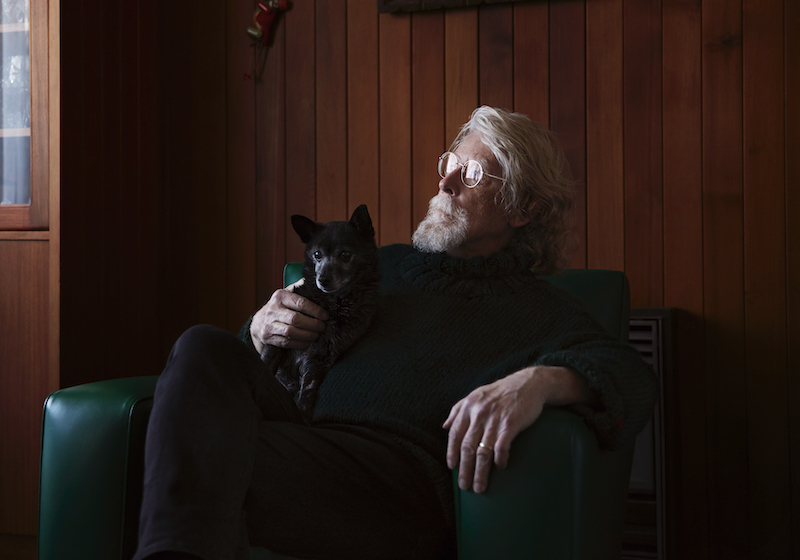 Michael Vale: Michael in the Madness

Beneath the theatrical chaos played out on Michael Vale’s super-charged canvasses are the accomplished creations of a highly organised, professional practitioner.

A photograph of Michael Vale in his studio has the Melbourne artist and academic surrounded by a cacophony of objects. A skull, a milk crate, half-finished paintings, a feisty schipperke, a cluster of oil paints. Its orderly disorder – rather like Vale’s painterly creations – charged, theatrical and pulsing.

When we speak in May, the artist is in the throes of painting for his forthcoming exhibition at Melbourne’s James Makin Gallery. It is set to be a heady collusion of figures, animals and whatsits, ones that combust before the viewer, confounding any prescriptive reading of what the paintings might mean. Some of the figures wear elaborate head pieces, others are shrouded in fabric, some are smoking pipes. There is a wild, eclectic bumping up of references – Surrealism, classic horror films, ghost stories, nursery rhymes, comic books – a weird otherworldliness evolving from a vast cultural pool that could be underscored by a Tom Waits soundtrack.

“I have been thinking of this new work as Gothic Absurdism,” says Vale, “and visually it seems to be drifting towards a kind of Goth Baroque.” Unrestrained, lavish patterning meets extravagant expression.

Vale’s forthcoming show, A Clown in the Moon, aims to present the world as a nonsensical place where things are never as they seem, “a world populated (and led) by shysters, clowns and grinning ghosts – the world of post-truth, if you like”, says Vale.

“The thing that appealed to me about painting when I was a child was that it seemed like a way of making the impossible become visible, a kind of gateway to parallel universes. I have learned to trust the painting I am working on to deliver a solution of its own, so I’m careful to avoid suffocating whatever it might mean to a viewer.”

Vale is attracted to the Absurdist philosophy that posits the search for meaning is at odds with the universe, “that rational thought is always prone to ambush from the unexpected,” he says. That Absurdism, the devoid of purpose, is arguably more pertinent in the current climate, where the making of art evolves in a highly charged context.

Otto Dix and Gustave Doré are cited by Vale as influences; Dix for his Expressionist distortion of figures, often set within a classical landscape, Doré for his use of the grotesque and abundant detail. But perhaps it is with the work of James Ensor that the artist’s current body of paintings could be most aligned. The 19th-century artist had a passion for bizarre subject matter, his surfaces frequently populated by a sensational array of pictorial imagery juxtaposed amidst a riotous whirl of colour and form.

Beneath the theatrical chaos played out on Vale’s chancy, muddled surfaces are the accomplished creations of a highly organised, professional practitioner; one who has an extensive history in lecturing on and working with both painting and film, and an exhibition history that heralds more than 20 solo shows. In 2006, Vale completed a PhD in Fine Art. His thesis Le Chien qui Fume – a Smokey Life was a satirical critique of how art history is constructed as a linear progression, eschewing the outsiders.

Vale’s forays into film are realised in his painting’s surfaces; in the ways they’re propelled by an inexorable sense of movement. One of the main influences on this aspect of his practice is his partner, the talented filmmaker Donna McRae.

The pair are working on a Tasmanian Gothic exhibition to be held at Hobart’s Despard Gallery in November. Gallery director Steven Joyce clearly enjoys representing Vale, recalling his win of the 2018 Hutchins Australian Contemporary Art Prize held in Tasmania. “It was a controversial choice and in a more conservative field of entries, one enthusiastically applauded by the other exhibiting artists.”

Controversial could also describe Vale’s three Archibald exhibited entries. Painting portraits of musicians, his impressive 2019 entry Kid Congo on the Island of the Pink Monkey Birds attracted critical acclaim and sold to a Sydney collector. Imagery and narrative in these works are played out against a backdrop that pays homage to the atmospheric Romantic landscape tradition and the artist’s 15-year stint as a scenic artist.

Works for Vale’s forthcoming show in Melbourne carry titles that hint at the artist’s penchant for romance – The Drunken Tulip Lover, The Queen of Spades, The Pink Cloud. The exhibition’s title A Clown in the Moon borrows its words from Welsh poet Dylan Thomas, “He demonstrated that language is endlessly malleable,” says Vale. “If you think of painting as a language, even a dialect, it can be shifted and shaped until it arrives at an interesting solution.”

And what does a future in the post-truth era look like for Vale? “I have no idea. Having worked with film and installation for a few years I keep coming back to painting, despite rumours of its demise, and find myself more committed than ever. I like (the French poet) Rimbaud’s idea that if you surrender to a propulsion of imagery, no matter where it takes you, you will end up with something far more authentic.”

March 31, 2022
Blood sculptures that melt in the warm air on opening night, chewing gum soldiers that visitors tread across the gallery floor and jaffas that melt into hair gel are all exchanges of substances that are part of the process in Tim Silver’s artworks. To Edward Colless they form a poetic theme of sickening, contaminating love like the kiss of a vampire.
END_OF_DOCUMENT_TOKEN_TO_BE_REPLACED
https://artcollector.net.au/wp-content/uploads/2022/03/Tim_Silver-1_1-800q.jpg 531 531 AdrianaBorsey https://artcollector.net.au/wp-content/uploads/2021/11/Art-Collector-logos-transparency-WHITE-1080x1080px-2.png AdrianaBorsey2022-03-31 15:44:352022-03-31 15:44:35Artist Profile: Tim Silver

March 31, 2022
Makinti Napanangka, now over 70 years old, paints on the ground in the open air hunched over her canvas, her brushstrokes confident and instinctive. The efforts of her day’s work are eagerly sought by institutions and collectors all over the world. Jennifer Isaacs visited this prominent desert painter’s remote home base at Kintore, to watch her work.
END_OF_DOCUMENT_TOKEN_TO_BE_REPLACED
https://artcollector.net.au/wp-content/uploads/2022/03/Makinti2-800-sq.jpg 545 545 AdrianaBorsey https://artcollector.net.au/wp-content/uploads/2021/11/Art-Collector-logos-transparency-WHITE-1080x1080px-2.png AdrianaBorsey2022-03-31 15:25:222022-03-31 15:25:22Artist Profile: Makinti Napanangka