A Milestone Birthday Worthy of Commemoration

Artist Guy Warren, Archibald Prize winner, educator and respected painter, this year celebrates his 100th birthday. On 16 April 2021, Warren will not only celebrate his milestone birthday but will unveil an exhibition of works at The National Art School, From the Mountain to the Sky: Guy Warren Drawings, which will  bring together 100 drawings covering the length and breadth of his career.

“I still find it fascinating to have a sheet of paper in front of me and put a mark on it,” said Warren in an interview with National Art School archivist and collections manager Deborah Beck. “As soon as you put a mark on it, you establish one big pattern with another big negative mark and then the question is, what do I do on the rest of that space to activate that space and make it look exciting? So, you put another mark on and that makes other shapes, other negative spaces – what the hell do you put on that to make those spaces activate and look exciting? So, it’s about that business it’s a game, but it’s an exciting game and I’ve always loved it.”

A host of other events around Sydney will also mark the occasion. King Street Gallery on William will host a show of Warren’s work titled The 100th year; The University of Wollongong, of which Warren was gallery director from 1992 to 2006, will host an exhibition of his works; the Art Gallery of New South Wales will hang Warren’s work in celebration of the occasion; and The Lane Cove Art Society, which Warren helped found, will put on a survey exhibition for the artist.

“Guy Warren is an Australian artist who has stood the test of time and is a testament of time,” says Randi Linnegar, director of King Street Gallery on William which represents Warren. “Having lived and worked as an artist overseas and in Australia for over 80 years, Guy’s unique vision has informed audiences with intellect and visual acumen. His imagery continues to explore, expand and develop and each day brings another possibility to what is a formidable career.”

Nicholas Thompson, director of Nicholas Thompson Gallery who also represent Warren, notes that the artists career has been hugely significant in the Australian painting scene. “Aside from being a significant Australian artist, and a significant Australian, with a long and distinguished exhibiting history, Guy Warren’s work continues to have a vibrancy, movement and spontaneity which I find remarkable and inspiring. I think this comes from a genuine love of what he does, and has been developed through a dedicated, lifelong practice.”

Each forthcoming event will celebrate the great legacy Warren has left on Australian painting, particularly on the subjects of landscape and portraiture for which his contribution has been immense. 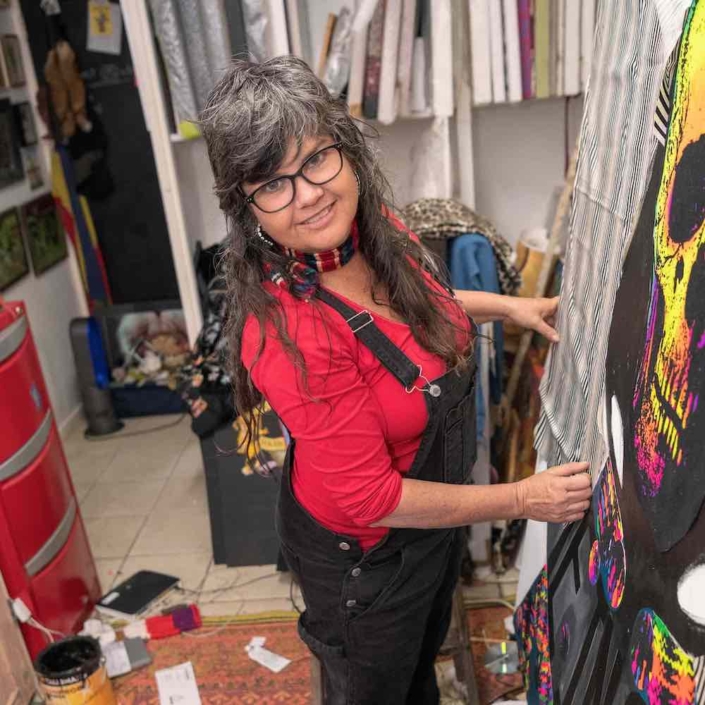 October 27, 2021
The event will combines film and visual art to celebrate the culture and stories of artists from the western desert. It also offers the chance to collect artworks from the central desert.
END_OF_DOCUMENT_TOKEN_TO_BE_REPLACED
https://artcollector.net.au/wp-content/uploads/2021/10/Dorothy-Dickson-at-work-in-the-Warlukurlangu-Artists-studio.-Image-courtesy-the-art-centre.jpg 1376 1376 MaddyMatheson https://artcollector.net.au/wp-content/uploads/2021/04/AC_logo_2.png MaddyMatheson2021-10-27 11:20:552021-10-27 15:44:35Desart presents Art Centres Online