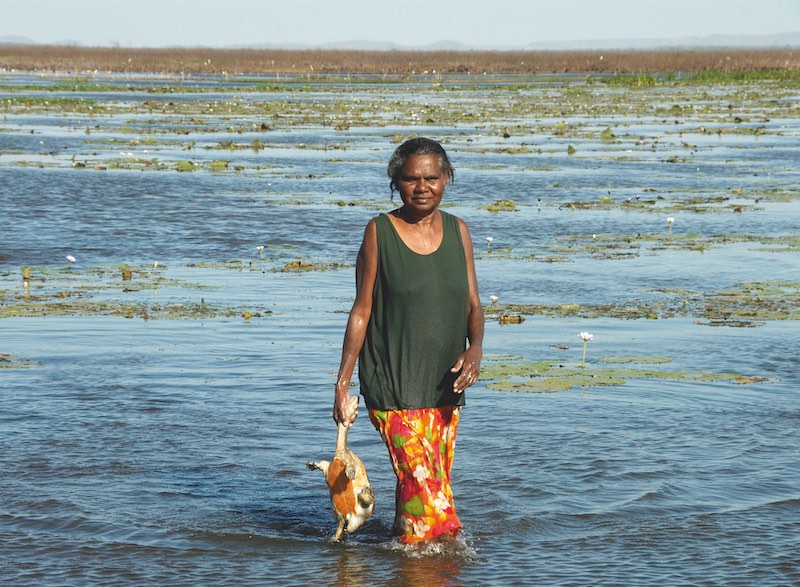 Regina Pilawuk Wilson is a driving force behind the Peppimenarti Community who elegantly and innovatively translates traditional weaving techniques on to canvas.

Ever since Regina Pilawuk Wilson’s golden yellow Syaw (fishnet) won the General Painting Award at the National Aboriginal and Torres Strait Islander Art Awards in 2003, her elegantly structured paintings have quietly but unequivocally fixed her name on the  contemporary art map. Born in 1948 into the Ngan’gikurrungurr language group, Wilson was a founding member of the Peppimenarti Community with her husband Harold Wilson in 1973 and she remains an important cultural mentor at Peppi. Situated around 320 kilometres south west of Darwin in the Daly River’s tropical wetland and floodplain country, the community has restricted access through much of the wet season, but its apparent isolation has been a great advantage in keeping law and culture strong.

Renowned for her traditional weaving skills, Wilson’s sun mats, syaws (fishnets) and warrgadi (string-bags) remain essential to her creative process however the transition from crafted, functional object to canvas, print-media and textiles is very much her trademark, a link explored in major exhibitions such as Floating Life at The Gallery of Modern Art/Queensland Art Gallery and String Theory at Sydney’s Museum of Contemporary Art.

A driving force at Durrmu Arts, Wilson has been instrumental in supporting emerging artists, though she remains singular in her painting style and essentially inimitable. Her work’s passing resemblance to the cross-hatching styles of Arnhem Land bark painters is coincidental, but it does act as a reminder of the interconnections across country. Wilson recalls a time when her people used to communicate across vast distances with the use of message sticks, a motif which along with fine skeins of dotting and lines found in durrmu (body-paint), have inspired recent paintings.

Invested with Ngan’gikurrungurr cultural inflection, Wilson’s visual language also communicates as a powerful form of abstraction, crossing over into the universal language of paint on canvas. In this context, her work was shown in curator Felicity Fenner’s Talking About Abstraction in Sydney in 2004, an exhibition that paid tribute Aboriginal painters such as Wilson who had, arguably, invigorated painting for a generation of urban artists. What is indisputable is Wilson’s capacity to communicate through the rhythm and rhyme of colour and line without over-working her signature style. Subtle reinventions are essential to the artists register, as she reflects: “That style, I like it to always be with the old design. I like to keep the traditional story in there, but I change it a little, to keep it beautiful with different colour and pattern. Otherwise, it’s always the same design, and we all get tired of it. It needs to be interesting, so I am interested, and the people who look at it are interested and they want to learn about my culture.”

A finalist for the Kate Challis RAKA Award, the Wynne Prize and the Togart Award, Wilson has a and a string of critical museum shows to her credit in Australia and overseas. Her work is held in major collections and she is currently working on large-scale commissions for American collector Dennis Scholl to be exhibited in 2016, as well as producing new work for Michael Reid in Sydney in October and Tunbridge Gallery in Subiaco in November. By maintaining strong professional relationships with respected galleries and dealers, Wilson has established a responsive market for her paintings through a modest number of solo exhibitions since 2004.

March 31, 2022
Blood sculptures that melt in the warm air on opening night, chewing gum soldiers that visitors tread across the gallery floor and jaffas that melt into hair gel are all exchanges of substances that are part of the process in Tim Silver’s artworks. To Edward Colless they form a poetic theme of sickening, contaminating love like the kiss of a vampire.
END_OF_DOCUMENT_TOKEN_TO_BE_REPLACED
https://artcollector.net.au/wp-content/uploads/2022/03/Tim_Silver-1_1-800q.jpg 531 531 AdrianaBorsey https://artcollector.net.au/wp-content/uploads/2021/11/Art-Collector-logos-transparency-WHITE-1080x1080px-2.png AdrianaBorsey2022-03-31 15:44:352022-03-31 15:44:35Artist Profile: Tim Silver

March 31, 2022
Makinti Napanangka, now over 70 years old, paints on the ground in the open air hunched over her canvas, her brushstrokes confident and instinctive. The efforts of her day’s work are eagerly sought by institutions and collectors all over the world. Jennifer Isaacs visited this prominent desert painter’s remote home base at Kintore, to watch her work.
END_OF_DOCUMENT_TOKEN_TO_BE_REPLACED
https://artcollector.net.au/wp-content/uploads/2022/03/Makinti2-800-sq.jpg 545 545 AdrianaBorsey https://artcollector.net.au/wp-content/uploads/2021/11/Art-Collector-logos-transparency-WHITE-1080x1080px-2.png AdrianaBorsey2022-03-31 15:25:222022-03-31 15:25:22Artist Profile: Makinti Napanangka

Liam Benson: Everyone We Know
Scroll to top